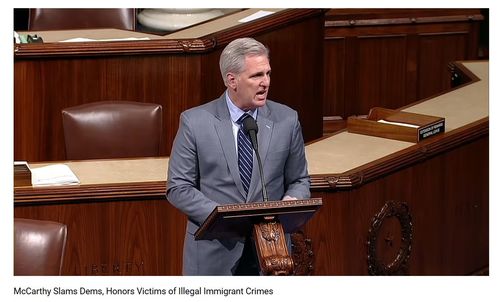 Of course, every crime committed by an illegal foreigner should have been prevented by immigration enforcement, but wasn’t. A top job of government is to protect the citizens from foreign enemies, and America’s open borders make that responsibility an ongoing joke. Politicians used to brag that America was a “nation of laws” but you never hear that phrase any more.

Plus, crime is a job some Americans will do, so we needn’t import foreigners to do the robbing and murdering for us.

Back to McCarthy, he began his remarks on the House floor with a denunciation of the Democrats’ outright refusal to negotiate with the president on funding for the border wall — even though top Dems like Barack Obama, Hillary Clinton and Chuck Schumer voted for the Secure Fence Act of 2006.

Incidentally, McCarthy is not the first member of the legislature to remember persons killed by illegal aliens: on Thursday, Senator Joni Ernst paid tribute to Sarah Root, just 21, who was killed by a drunk-driving illegal three years ago. Both the Republican-run House and Senate have held hearings in the last four years focused on the human consequences of crime caused by open borders. And Donald Trump’s 2016 GOP Convention heard from several crime victim families. 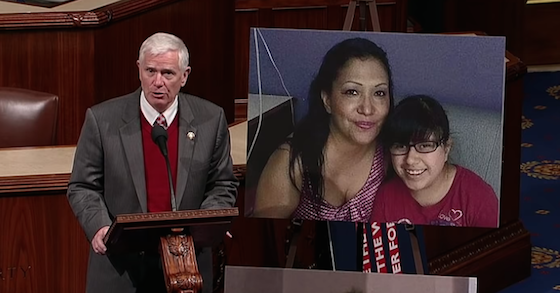 McCarthy spoke about the crime issue starting at around 3:20:

LEADER KEVIN McCARTHY: There has been 266,000 criminal aliens arrested in the last two years. This includes charges and convictions of 100,000 assaults, nearly 30,000 sex crimes and 4000 violent killings. Three hundred Americans die every week from heroin, and more than 90 percent of heroin comes from across the southern border. And roughly 10,000 children are being smuggled into the US every year to be sold for human trafficking.

And they are celebrating a status quo that leaves 700,000 DACA-designated individuals unsure about their future. It was the best display of politics that this country is sick and tired of seeing. Zero-sum politics and nothing ever changes. Well I’d like to spend some time and reflect on Americans and their families who may not have been celebrating the status quo preserved by this majority: