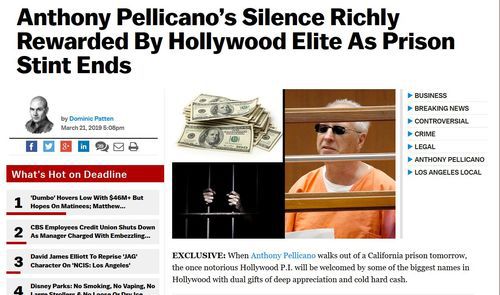 Hollywood's and Hillary's Private Eye Anthony Pellicano Is Out of Prison

As I pointed out recently, big shots like Hillary Clinton and Jeff Bezos tend to believe in conspiracy theories, at least when it comes to theories they’ve posited about vast right-wing conspiracies out to get them.

One reason big shots tend to be conspiracy theorists is because they can afford to employ shadowy figures, such as private detective Anthony Pellicano, whom Bill and Hill employed in 1992 to smear Gennifer Flowers.

Pellicano has hundreds of hours of wiretaps of famous people’s phone calls, but he never gave up the password to his digitized files to the Feds. He did his time, I think totalling about 13 years, and is now a free man.

EXCLUSIVE: When Anthony Pellicano walks out of a California prison tomorrow, the once notorious Hollywood P.I. will be welcomed by some of the biggest names in Hollywood with dual gifts of deep appreciation and cold hard cash.

Ending a 15-year sentence behind bars on his 75th birthday, the soon-to-be former inmate of Terminal Island Federal Correctional Institution is the recipient of a flush fund set up by Tinseltown power players, I’ve learned.

Intended to help Pellicano get solidly back on his feet as he steps back into freedom, the fund is in the six-figure category, one insider confirmed. The fund has seen donations from top executives and former clients of the fixer.

While more than some would think appropriate and less than others feel Pellicano deserves, the rich and famous are writing fat checks in no small part because the former sleuth kept his mouth shut to the feds and other law enforcement officials while doing his time.

“There are a lot of people who were very lucky that Anthony stayed silent about what he knew and what he did,” a knowledgeable source told Deadline of Pellicano’s leverage in and out of prison. “He could have made a deal, a lot of deals, and he didn’t and that matters to this crowd.”