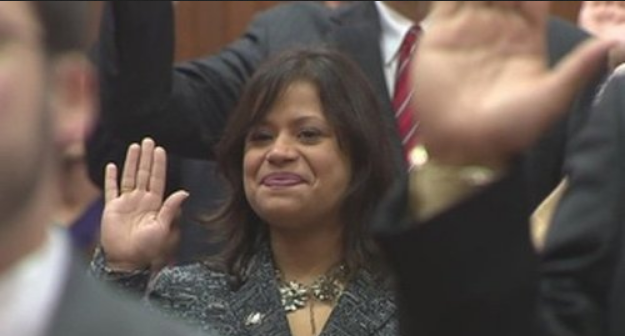 Ayala, 31, is accused of voting in local and state elections in districts she did not live, the Chief State’s Attorney’s Office said in a press release.

The arrest warrant affidavit also alleges Ayala provided fabricated evidence to state Election Enforcement Commission investigators that showed she lived at an address in a district where she voted while actually living outside the district, according to the release.

Ayala, who represents the 128th District, was elected in 2012, replacing her cousin, Andres Ayala, who was elected to the state Senate.

...Ayala’s mother, Santa, was also investigated by the Elections Enforcement Commission. The commission also recommended criminal charges be filed against Santa Ayala, the Democratic registrar of voters in Bridgeport, but none have been filed as of Friday.

Emphases added. Since then:

Curiously, Democrats are have no hesitation about alleging vote fraud among themselves. Santa Ayala's tenure as Registrar has seen particularly bitter infighting (Absentee ballots foul Bridgeport primary, by Brian Lockhart, CTPost.com, September 14, 2015). Wikileaks has revealed that the Clinton campaign still believes Obama cheated back in the 2008 Colorado caucuses.

The Ayalas appear to be a political dynasty, or infestation, in Connecticut. In January, Ayala's cousin, Andres Ayala, was apparently forced to step down as head of the state's Department of Motor Vehicles after various scandals including...chaos caused by a program to give licenses to illegal aliens [DMV Commissioner Ayala Resigns After Year Of Problems, by Jon Lender, Hartford Courant, January 20 2016).