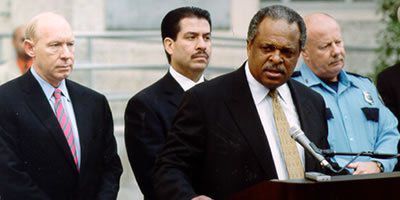 The words "police the black community" in this context don't mean engage in Fascist repression, but rather help deal with the scourge of black on black crime.

However, the standards of the day meant that the city could not have allowed him to arrest white criminals.

All right, we'll allow that Houston used to be racist. Have they stopped being racist, and treating their officers differently by race? Er, no.

I did a column in 2005 about black HPD Chief of Police Harold Hurtt, who didn't want to cooperate with the Minutemen.

Chief Hurtt is an African-American who was appointed Chief of Police, after a search which, I strongly suspect, was limited to African-American police executives. (“I want a police chief who understands our diverse community.”—Houston Mayor Bill White).  Hurtt, who had been chief of police in Phoenix, Arizona, replaced Houston's previous African-American Police Chief, who left more or less in disgrace. 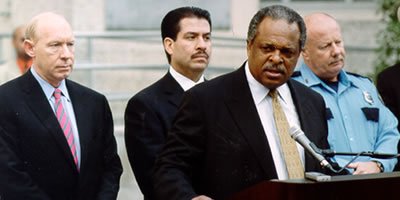 On the podium during the change of command ceremony was the acting Police Chief, Joe Breshears, a “30-year veteran” of the Houston Police Department. I wonder how he felt about the appointment of an out-of-town police chief who couldn't find Police Headquarters without a roadmap.

(Hiring out-of-towners has its problems—for about a year, Chief Hurtt was unable to wear an HPD Uniform because he hadn't passed the Texas state certification exam for law enforcement officers.) 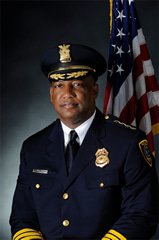 Hurtt is no longer Chief of HPD—he was replaced by long-serving HPD officer Charles McClelland—who is also black. Officer Edward Thomas was universally beloved at the time of his death, finding ways to stay on duty into his nineties. The headquarters he couldn't, originally, enter through the front door, is now the Edward A. Thomas building.

But a white man, apparently, cannot be chief of the Houston Police Department.