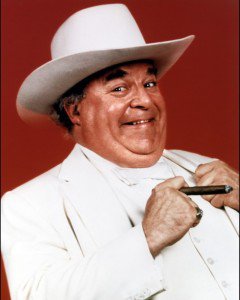 At ThinkProgress, they don't like actual Texans, with their conservative values, so this  headline FBI Arrests Nearly Every Single Elected Official In A Texas Town, by Esther Yu-Hsi Lee Feb 7, 2016 seems to hint that the "elected officials in a remote Texas town" were the movie stereotypes that TVTROPES files under “Fat Sweaty Southerner In A White Suit“ and “Corrupt Hick.  You know, Boss Hogg and Roscoe P. Coltrane.

They're not. They seem to be mostly Mexican, or Mexican-Americans, with the addition of a Vietnamese who has assimilated to the local Tex-Mex "culture of corruption" rather than American values and a regular American named William Jonas who is the city attorney.

The picture above is from Crystal City left leaderless |4 of 5 on council under indictment, San Antonio Express-News, By John MacCormack, February 5, 2016. The reason there's a picture of Popeye on the city seal in the background is because spinach is historically a major cash crop in the area—a statue of Popeye was erected in 1937.

Not all the council members were arrested in this raid, two of them weren't. One was city councilmen Joel Barajas, who may be an honest man. If so, I bet he feels kind of lonely. The other one not arrested in the raid, and the reason it says "4 of 5 on council under indictment," is Marco Rodriguez, who "was recently arrested on federal charges of smuggling immigrants."[Arrested officials are still in charge of Crystal City MaryAnn Martinez, KENS 5 San Antonio, February 5, 2016].

Coming soon to an America near you.