Here's a story from pro-gun site The Truth About Guns. The words "Not Shown" in brackets mean that what you are seeing is a stock photo of a good-guy National Guardsman—who happens to be white. And there we were thinking that 8500 U.S. gun dealers near the border were supplying the drug cartels with weapons. Well, that’s what the ATF thought. Or wants Congress to think. But then, the ATF were (are?) the ones helping make that happen. Meanwhile, I found this little tidbit buried in elpasotimes.com‘s report on yesterday’s DEA – ICE drug cartel sweep: “In operations in McAllen in South Texas, a drug-smuggling ring accused of working with Mexico’s Gulf Cartel was dismantled after 11 people — including a U.S. National Guardsman allegedly providing the group with U.S. military equipment — were arrested in connection with the case Wednesday. Authorities recovered hand grenades, assault rifles and bulletproof vests.” The monitor.com has more . . .[more]

According to  National guardsmen among McAllen drug, guns bust, by Erika Flores, ValleyCentral.com, February 24, 2013, one accused's actual photograph looks like this: 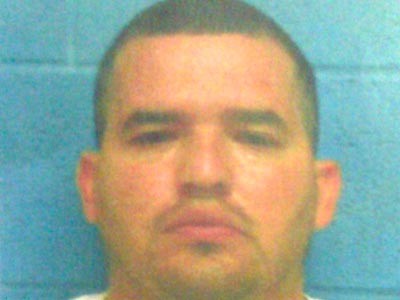 Padilla is a Mexican-American, not a Mexican. I know this, because while news stories don't usually say, the US Attorney's office did:

A second complaint filed today also charges Zapata and De La Paz along with Jose David Arturo Reyes-Lopez, 28, and Jose Guadalupe Reyes-Martinez, 48, both Mexican nationals, with unlawful export and attempted export of 1,802 cartridges of .308 caliber ammunition seized from a residence on I-J Avenue in McAllen on Wednesday.[More]

One of the things Padilla is charged with selling to the cartels is a machine-gun. Let me make that clear—people tend to call Uzis, old style tommyguns, and M-16s "machine-guns." This was a machine gun. Like this: 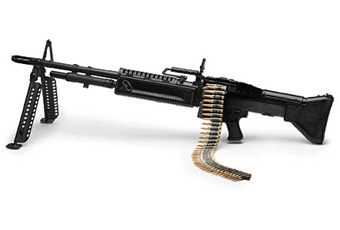 Does the National Guard, when it's guarding the border, have anything like this? It does not. It has M-16s with no ammunition.