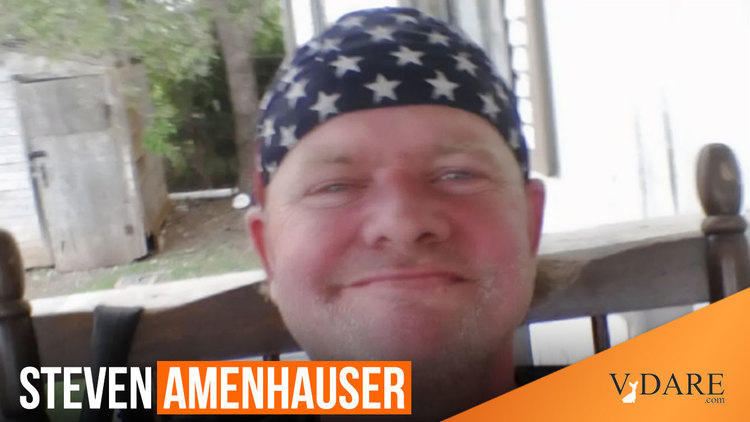 His Name Is Steven Amenhauser: 53-year-old White Male Dies After Being Set On Fire By Two Black Teens (Ages 16 And 14)

His Name is Steven Amenhauser.

He was set on fire by two black teens (ages 16 and 14)—who doused Steven in a flammable liquid—and murdered in this “brutal and vicious crime.”

Two teenagers charged with murder in the death of a man set on fire pleaded not guilty in a virtual court arraignment Wednesday.

The same two teenagers were arrested together by Gates Police two months ago for being in a stolen car.

Gates Police charged one teen’s father and the other teen’s mother.

The Gates chief says the charge was for not supervising their children and not knowing where they were. But six weeks after those tickets were written, Rochester Police say the same two teenagers lit a man on fire and he died three days later.

The teenagers, 16-year-old Jayvion Perry and 14-year-old Adriel Riley Jr., are in the Children’s Detention Center on no bail.

The prosecutor called this a “brutal and vicious crime.”

The victim is Steven Amenhauser, a man who grew up in Texas. Police say he lived alone in a Lyell Avenue apartment after his long-time girlfriend died in October. Monroe County Legislator Vince Felder told News10NBC the county will pay for Amenhauser’s funeral. Felder sponsored a bill to raise the amount of money the county can spend on an indigent funeral from $1,250 to $2,000. The bill passed unanimously at the county legislature meeting on March 9.

Capt. Frank Umbrino, RPD Major Crimes: “Unfortunately there was no family in his life at the time of his death. So the reason I’m telling you a little bit about him is because there is nobody else to speak for him.”

Police say Amenhauser died three days after Perry and Riley doused him with a flammable liquid and set him on fire.

And the good folks at Outkick.com document why this isn’t an International story.

A disturbing story emerged over the weekend. Two teens in Rochester, New York set a 53-year-old mentally-ill man on fire, ultimately killing him. Interestingly, unlike many past stories written in The New York Times and USA Today , the races of the involved parties were not mentioned. In 2021, that’s rare. It turns out, the two teens are black and the now-deceased mentally-ill man was white.

I will ask a simple question: what if the roles were reversed? If two white teens randomly set a mentally-ill black man on fire, killing him — it would unequivocally be deemed an act of racism. Riots would break out, social media would go to war, buildings would burn, and talking points would appear around the clock.

Rochester journalist and radio host Bob Lonsberry reports that the two teens instructed the victim to tell authorities they were “white” as they burned him alive. The Daily Wire confirmed Lonsberry’s report.

The demand to lie about the teens’ skin color delivers a strong hint that the assault and murder was possibly racially-motivated. While the order does not definitively prove racism, it’s more evidence toward the label than most incidents the national media has called undoubtedly horrible acts of racism.

Columnist Amanda Prestigiacomo says, “News reports of the incidents concerning Michael Brown, Freddie Gray, Eric Garner and George Floyd, for example, were not shown to be connected to race, other than the media’s injection of the issue into the tragic incidents.”

The police have yet to announce a motive, but do say the teens had no prior connection with the man. And the details are horrific. The teens, ages 14 and 16, snuck into the man’s home on Friday, sprayed him with an ignitable fluid, and set him on fire until 70% of his body was covered in second and third-degree burns. The victim died four days later in a burn trauma unit.

The teens have been charged with only first-degree assault.

A white person hurting a black person is not, on its face, racist, yet we are always told it is. A black person hurting a white person is not, on its face, racist either, but these instances are ignored. In this case where race is a possible motive for the killing based on two reports, the mainstream press refuses to mention race and therefore refuses to consider it.

His Name is Steven Amenhauser.

He was set on fire by two black teens (ages 16 and 14)—who doused Steven in a flammable liquid—and murdered in this “brutal and vicious crime.”

Were America REALLY a “white supremacist” country, where white privilege was found around every corner and under every rock (permeating the air we breathe), with systemic racism, structural inequality and implicit bias guiding our every decision, the name Steven Amenhauser would be on every tongue, spoken solemnly by every child.