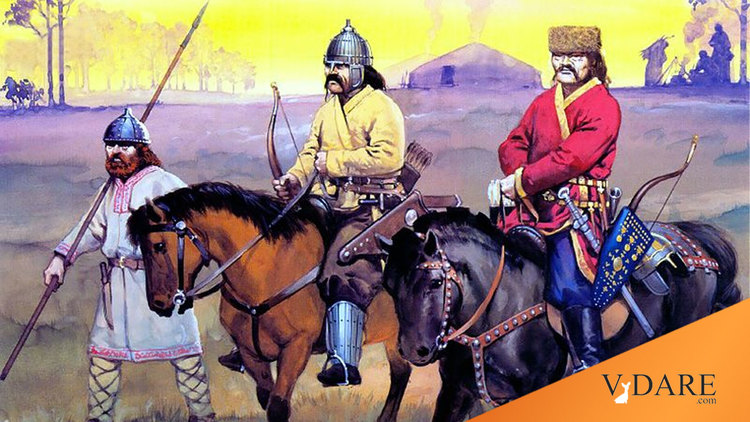 The Avars Of Dark Age Hungary Were Mongolians

Mystery warriors made the fastest migration in ancient history

The Avar traveled from Mongolia to Hungary in the span of a decade or two, DNA evidence confirms
1 APR 2022 BY ANDREW CURRY

The Avars were nomadic people who arrived in Eastern Europe during the Dark Ages and dominated modern Hungary for a couple of centuries until being crushed by Charlemagne in the late 700s, after which they vanished from history. Whether they are related to the modern Avars who currently lived in Dagestan in the Caucasus is obscure.

Now, archaeological and genetic evidence reveals the Avars were migrants from Mongolia—and their migration was, up to that point, the fastest long-distance movement in human history.

The Avars had no written records. Grave goods and historical accounts suggest they dominated the plains of modern-day Hungary soon after their arrival in Europe about 1500 years ago. … (The earliest stirrups in Europe are from Avar graves.)

Stirrups are often cited as a key invention, allowing a mounted soldier to deliver blows to foes without being knocked off his horse.

It was those elaborate burials that yielded clues to the Avars’ origins. An international team of researchers extracted ancient DNA from the skeletons of dozens of high-status men and women buried in 27 sites from modern-day Hungary. Comparing that DNA with existing ancient DNA data, the team found the closest matches came from graves from the sixth century in what is today Mongolia, they report today in Cell.

“Genetically speaking, the elite Avars have a very, very eastern profile,” says Choongwon Jeong, a co-author and a geneticist at Seoul National University.

The first Avar burials were a near-identical match for an individual buried just a few decades earlier in eastern Mongolia, showing the first Avars in Europe probably made the journey of almost 7000 kilometers themselves. … “The DNA is so close it’s got to be within one generation, or less,” Jeong says.

That genetic data backs up two historical accounts of the Avar’s origins. One sixth century Chinese source describes an enigmatic steppe people called the Rouran, one of many horse-riding nomadic groups that swept out of the Mongolian steppes to attack their northern borders. The Rouran’s grassland empire was reportedly defeated by rival nomads in 552 C.E.

A weird thing about the ethnogenesis of steppe empires is that they often begin with defeat at the hands of a more powerful rival back home. The losers flee across the vast Eurasian steppe and wind up with a mighty empire far away. Two lessons I’d take from this is that luck and learning play big roles in war.

A continent away, and just 15 years later, diplomats from Byzantium, the eastern remnants of the once-mighty Roman Empire, reported the arrival of a new group from the east on the shores of the Caspian Sea. The newcomers called themselves the Avars, and claimed to be related to a far-off people known as the Rouran.

But was their origin story true, or just a boast?

The new genetic data seem to answer that question, says Walter Pohl, a historian at the University of Vienna. “We have a very clear indication that they must have come from the core of the Rouran Empire. They were the neighbors of the Chinese.”

After their arrival on the fringes of the Roman Empire, the Avars pushed into central Europe, conquering the plains along the Danube River between modern-day Vienna and Belgrade, and even laying siege to Constantinople, now Istanbul, in 623 C.E. They were finally defeated by Charlemagne—a king whose bigger, better army destroyed their capital and eventually united most of Europe for the first time in centuries—in the late 700s.

What happened after the Avars’ defeat at the hands of Charlemagne remains unclear. Their genetic signature soon dwindled to almost nothing in the regions they once ruled, Gnecchi-Ruscone says. …