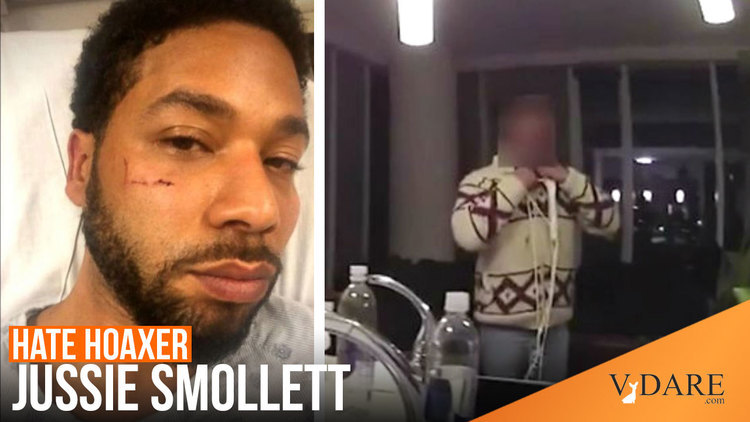 A Chicago jury found Jussie Smollett guilty of five counts of disorderly conduct for making false reports to police that he was a victim of a hate crime in January 2019.

A disorderly conduct charge for a false crime report is a Class 4 felony and punishable by up to three years in prison and a $25,000 fine.

However, CNN legal analyst Joey Jackson said the judge could give the former “Empire” actor probation, but added that Smollett, “exposed himself to jail time,” when he testified in court.

“When you testify in a case, the judge now gets a sense of what you said,” Jackson told CNN. “What Jussie Smollett said was resoundingly rejected by that jury. The jury did not buy what he was selling. That’s not lost upon a judge. You came into the courtroom and fabricated.”

Jussie, you know how you are always saying, “But what I really want to do is direct”? Well, don’t. Also, don’t try to write or be your own casting director.

Laura Coates, a former federal prosecutor, agreed with Jackson, saying Smollett’s testimony was a “miscalculation” by the defense team.

“So him taking the stand lead [sic] to his exposure in the way Joey has spoken about,” Coates said. “A judge is now looking at you, taking everything you had to say and assessing it.”

But Jussie hadn’t been in the spotlight since 2019. He missed it.

Smollett was acquitted on one count of felony disorderly conduct.

So the jury didn’t just throw the book at him?

Smollett took the stand and testified before the Chicago jury that he never lied to police and denied orchestrating the attack on himself.

Prosecutors sought to show that the actor made false reports to police after paying Olabinjo and Abimbola Osundairo to carry out a staged hate crime attack against him to garner sympathetic media coverage.

The Nigerian bodybuilder brothers were the icing on the cake. What a hilarious story. Shall we see its like again?

Sailer’s Boast: Whenever there is some remarkably dumb development flabbergasting the respectable pundits, I’ve no doubt explained the entire phenomenon years ago in various Taki’s columns.

For example, the sidesplitting Jussie Smollett fake noose story is a classic example of the hate-hoax phenomenon that I’ve been explicating since 2004. So, I’m going to take another victory lap to review what I’ve figured out about hate hysteria over the past fifteen years...

To you or me, Jussie’s tale probably sounds like just about the stupidest hate hoax yet. But that’s because we possess the conceptual category of “hate hoax.” So it’s easy for us to call up from our memories a long list of such instances that previously dominated the headlines (for example, in this year alone, Covington Catholic and poor Jazmine Barnes) and conclude that, wow, this one is even more self-evidently absurd than the UVA fraternity initiation gang rape on broken glass hate hoax that bedazzled the national press in 2014.

In contrast, the New York Times, for instance, has never even printed the term “hate hoax.”

Instead, there’s just an Epidemic of Hate perpetrated by what Tom Wolfe would call the Great White Defendants…and then there are forgotten random incidents that didn’t quite pan out. But to the prestige press there’s no such thing as a pattern of purported hate crimes routinely imploding embarrassingly.

Unfortunately for Jussie, he went to the police with his cock-and-bull story. That’s not the kind of mistake that Jackie Coakley of UVA made. She told endless variations of her story to everybody…except the cops, and has therefore gotten away scot-free.

Unlike the national media and presidential contenders, local police are perfectly familiar with the possibility that people sometimes lie to them. In fact, folks perjure themselves to cops all the time. They’re used to it. So cops, unlike candidates and commentators, don’t turn off their brains as soon as somebody invokes identity talismans such as race and sexual orientation.