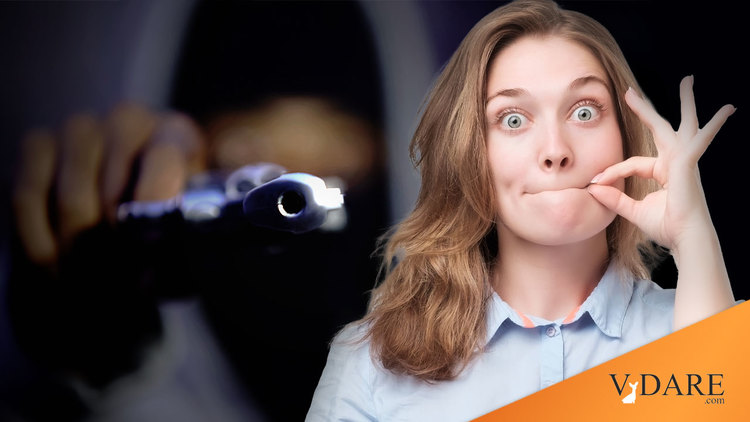 As I may have mentioned once or twice before, to understand American society today, you have to be aware of the extraordinarily high black murder rate, which is a huge causal factor behind so many current controversies. But, increasingly, you are never supposed to mention it. Thus you get “analyses” like this in the Washington Post’s political science column:

A prosecutor charged the Michigan shooter’s parents. That’s likely to be used against Black parents soon.

Evan Bernick (@evanbernick) is an assistant professor of law at the Northern Illinois University College of Law, where he teaches criminal law and procedure.

On Nov. 30, a 15-year-old Michigan student allegedly killed four of his Oxford High School classmates and wounded seven others with a handgun that his parents bought him for Christmas. Three days later, Oakland County prosecutor Karen D. McDonald announced that her office was charging his parents with involuntary manslaughter, a felony that is punishable by up to 15 years in prison.

This is an extraordinary prosecutorial response. No parent has ever been convicted of a homicide offense in connection with their child’s mass shooting. Convicting the parents would break new ground.

But such a conviction could have unintended consequences during an era of unprecedented rates of imprisonment in the United States. Any time criminal law expands, it may be used to target Black Americans, already disproportionately represented in the growing U.S. prison population. Given common negative stereotypes about Black criminality and parental irresponsibility, holding parents responsible for their children’s felonies could easily lead to still more racially disparate prosecutions....

How might such an expansion of parental criminal responsibility — regardless of whether Michigan courts uphold this — be put to use in cases involving defendants who, unlike the Crumbleys, are racial minorities?

Americans live an era of mass incarceration, with rates of imprisonment that are unique in the history of the United States and set it apart from other nations. Michelle Alexander’s influential book The New Jim Crow brought mass incarceration into popular consciousness. Alexander reported on racial disparities within the rising U.S. prison population and contended that these result from laws and institutions designed to subjugate people of color. Ethnic studies scholar Dylan Rodriguez has suggested that “targeted incarceration” might be a more apt description.

As law professors Dorothy Roberts, Michele Goodwin, Kristin Henning and others have documented, among those targeted are Black children and parents. Poor Black women are disproportionately prosecuted for drug and alcohol use during pregnancy. White and Black women use drugs at roughly the same rate, but Black women are more likely to be reported to child protective services.

Black children are more likely to be perceived as older than they are and to be charged with crimes as adults. So-called “sagging” ordinances target Black youth fashions, with at least one jurisdiction holding parents criminally liable if they “willfully allow” their child to appear in public with underwear visible. Curfew laws proliferated in the 1990s because of stereotypes about Black youth violence; many of these also branded parents as criminals if they failed to keep their children off the streets after hours.

If the Crumbley prosecution expands law enforcement’s power to charge parents for their children’s crimes, law enforcement officials who share widely held implicit biases against Black children and parents could easily choose to use that power disproportionately against racial minorities.

And finally, a gingerly, oblique admission that maybe blacks do commit more crimes on average:

Racial minorities are more at risk for gang involvement, and gang initiation often involves acts of violence. Prosecutors might target Black parents who fail to identify warning signs in advance and don’t intervene before someone gets hurt or killed.

Oakland County prosecutor Karen McDonald’s motivations for bringing charges against the Crumbleys may have nothing to do with race. But historically, law enforcement officials disproportionately use criminal law to break up Black families, whether by incarcerating parents or channeling Black children into the juvenile justice system, which, like the adult prison system, disproportionately incarcerates and supervises children from racial and ethnic minorities. If officials want to avoid contributing to this problem, they may wish to consider alternatives.

In the comments, Washington Post subscribers denounce this column because they want to punish the white parents. Nobody mentions that the “stereotypes” are based on fact.