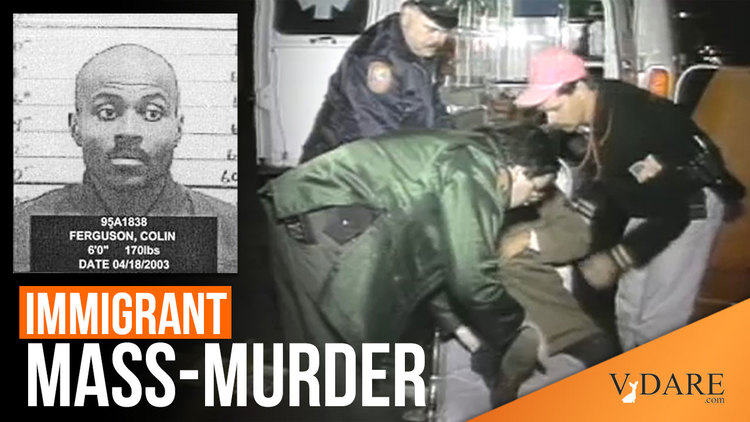 Hiroshi Motomura's Michigan Law Review article about Alien Nation showed up in a search result recently, and I had a look at what are some standard soundbites that critics complained of at the time. (An early example of what Kathy Shaidle calls "Ransom Note Racism.") Motomura wrote

Brimelow asserts that were it not for U.S. immigration policy, Colin Ferguson, with his "hatred of whites," would not have come to this country, and no one would have been killed in the Long Island Rail Road shootings (pp. 6-7). Brimelow warns us not to "embrace" Haitian refugees because they may be HIV-positive (p. 113). He tells us that seventy-five percent of Nigerians are involved in perpetrating fraud schemes (p. 186), and that the "legacy of Chaka, founder of the Zulu Empire ...is not that of Alfred the Great, let alone that of Elizabeth II or any civilized society" (p. 108).

Well, since then we've seen a lot of violence in South Africa, a lot of Nigerian fraud, and conditions in Haiti aren't much better. I just want to mention that Nigerian crime figure—it's from David Simcox's The Nigerian Crime Network [PDF] published in the Social Contract in 1993 before ordinary American had heard of email.

Of course Peter Brimelow had footnoted it in Alien Nation, but Motomura seems to think Peter was just making it up. Just so you know, Simcox's estimate—based on law enforcement sources—wasn't 75 percent, it was 75 to 90 percent.