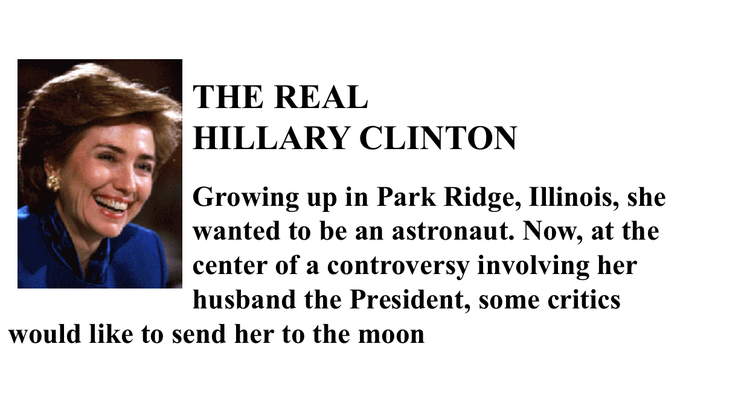 James Taranto's Best of the Web Today has an item about Hillary Clinton:

The Migrant Workers of Park Ridge

CNN reports on a speech by New York's junior senator:

Appearing before a religious conference earlier this week, Sen. Hillary Rodham Clinton (D-New York) told the audience that as a child attending Sunday school she would baby-sit the children of migrant workers so that their older siblings could join their parents at work.

"I was fortunate that at an early age, through my church, I was given the opportunity to expand my horizons," Clinton told the 600 adults and teenagers attending the Sojourners "Covenant for a New America" conference.

Taranto is wrong: for once Hillary isn't lying. The 2000 census isn't relevant here; Hillary was babysitting 40 years ago, before Park Ridge was built up to the extent that it is today, and I'm guessing that they had fruit orchards.

Hillary was part of her local United Methodist youth group, run by the Reverend Don Jones, a fact that frequently comes up in psychobiographies of her:

A devout Methodist, Hillary, along with her church youth group, helped to minister to the poor Mexican children of migrant workers who picked crops three blocks from her home.[Emphasis added.] Midwest Today: THE REAL HILLARY CLINTON, 1994

Hillary as I noted here a while back, is a member of the Religious Left. Sometimes that means doing good works—and sometimes bad works.

Anyhow, there's larger point. (There's always a larger point.) In 1970, there were 117,268 Mexicans in Illinois, more than in any other Midwestern state.

In 2003 Herbert London was on the highway near Chicago, needed directions to the airport, and couldn't find anyone who could speak English to give them to him.

Taranto's employers at the Wall Street Journal have been cheering this on.

Taranto and the editors of the WSJ live in areas that are as insulated from the effects of immigration as he says Park Ridge was. It's no wonder they have trouble getting it.