Hillary Fell for and Tweeted Out Albany Hate Hoax

Our ingenue Democratic frontrunner appears unaware of the concept of the campus hate hoax, naively tweeting out the latest lies. 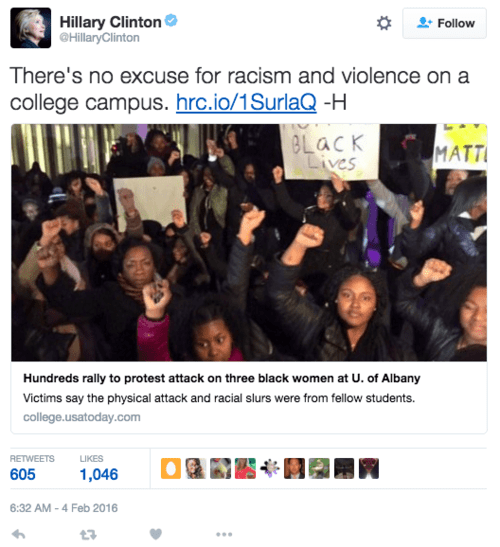 Racism Charges in Bus Incident, and Their Unraveling, Upset University at Albany

ALBANY — The allegation set social media ablaze, sowing shock and outrage as it went: Three black students at the University at Albany had been attacked on a city bus by a group of white men who used racial slurs as other passengers and the driver sat silently by.

The Jan. 30 episode, reported to the police, would draw hundreds of people to a campus rally against racism; an emotional response from the university’s president; and even the attention of Hillary Clinton, who condemned the attack on Twitter. …

But only a few weeks later, what seemed to be the latest iteration of a now-familiar debate about race on campus — the protests, the anguished soul-searching, the calls for greater faculty diversity and administrative changes — has metastasized into a controversy of an even more scorching kind: the allegation, the authorities said, was a lie.

Surveillance videos did not support the accounts of the young women, Ms. Burwell, Alexis Briggs and Ariel Agudio. Neither did the statements of multiple fellow passengers. Rather than being victims of a hate crime, the authorities said, the women had been “the aggressors,” hitting a 19-year-old white woman on the bus.

All three pleaded not guilty on Monday to misdemeanor assault charges; Ms. Burwell and Ms. Agudio, who publicized the episode through Twitter, also pleaded not guilty to charges of making a false report. The judge who oversaw the arraignment called the charges, if proved, “shameful.”

It was a turnabout tailor-made to delight conservative media outlets and to ignite social-media recriminations. There were calls for the university’s president, Robert J. Jones, to apologize for his remarks, and for Mrs. Clinton, who is seeking the Democratic nomination for president, to remove her post on Twitter.

For students and activists in Albany and elsewhere, the stakes were greater. Many feared that the hard-won dialogue over racism on campus, the fragile moment of unity, would disappear under a wave of finger-pointing.

“People were forced to think about things that they didn’t think about, maybe, before,” said Amberly Carter, a coordinator at the university’s Multicultural Resource Center who helped organize the rally. “So do we now stop defending black women because of what happened?”

The concept of objective principles seems lost on SJWs — all that matters is Whose Side Are You On?

The Feb. 1 rally, in front of a campus fountain, had seemed to signal an awakening for a university that had watched the University of Missouri, Yale and other institutions grapple with protests over racial discrimination without quite erupting into its own. Young black women spoke of the subtle racism that stamped their daily lives. Students, faculty members and staff members of all races listened intently….

But whatever solidarity emerged has fractured over the charges against the young women, putting their supporters on the defensive. Behind the rush to declare the matter a hoax, they say, is an ingrained prejudice against taking the concerns of minority women seriously. …

Sami Schalk, an assistant professor in the university’s English department, who has devoted class time since the bus episode to talking through the implications with her students, said she was concerned that the women’s detractors had failed to consider the prejudice and “racialized language” the young women may have encountered on campus or before the bus ride that could have played a role in provoking the fight.

As commenter Ben Tillman has pointed out, the term “hate crime hoax” is misleading. These kind of hoaxes are racial hate crimes, concocted specifically to cause hate against white people.