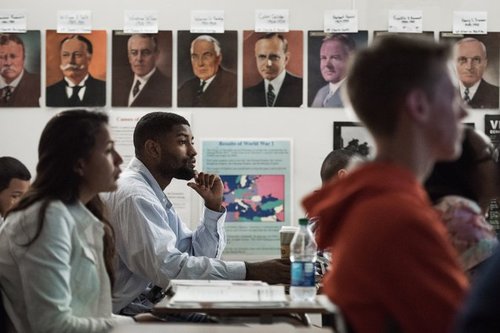 … It is a pattern repeated in other school districts across the state and country — urban, suburban and rural — where the number of students earning high school diplomas has risen to historic peaks, yet measures of academic readiness for college or jobs are much lower. This has led educators to question the real value of a high school diploma and whether graduation requirements are too easy.

… Earlier this month, the Department of Education announced that the national graduation rate hit 82 percent in 2013-14, the highest on record.

But “the goal is not just high school graduation,” Arne Duncan, the departing secretary of education, said in a telephone interview. “The goal is being truly college and career ready.”

The most recent evaluation of 12th graders on a national test of reading and math found that fewer than 40 percent were ready for college level work. College remediation and dropout rates remain stubbornly high, particularly at two-year institutions, where fewer than a third who enroll complete a degree even within three years. …

Still, there is no single reason these rates have increased.

Economists point to a decline in the teenage pregnancy rate, as well as a reduction in violent crime among teenagers. Some districts use data systems to identify students with multiple absences or failed classes so educators can better help them.

Another reason is that there aren’t many jobs for teenagers to do. A decade ago in California during the construction boom, it was not uncommon for boys with something on the ball to drop out of high school to work construction.

And an increasing number of states and districts offer students more chances to make up failed credits online or in short tutoring sessions without repeating a whole semester or more.

States also vary widely in diploma requirements. In California, South Carolina and Tennessee, the authorities have recently eliminated requirements that students pass exit exams to qualify for a diploma. Alaska, California, Wisconsin and Wyoming demand far fewer credits to graduate than most states, according to the Education Commission of the States, although local school districts may require more.

According to one analysis of requirements for the class of 2014, 32 states did not require that all graduates take four years of English and math through Algebra II or its equivalent, which is often defined as the minimum to be prepared for college.

And then all college graduates can be required to take and pass Differential Equations so they are prepared for grad school, and so on.

Or maybe a high school diploma is a reasonable terminus for full time education for a fraction of the population. This is especially true in a society in which employers use a high school diploma as a predictor of whether or not the job applicant has too turbulent a personality to be hireable. Most jobs don’t actually require Algebra II skills, so it’s unfortunate to lump in good kids who just aren’t smart enough to pass Algebra II as high school dropouts along with the gangbangers.

Over the past decade in California, several large urban districts adopted coursework guidelines aligned to entrance requirements at the state’s public universities. Los Angeles initially required that students earn at least a C in those classes, but the number of students on track to graduate plummeted. Now grades of D or higher are accepted.

My thinking is that since we don’t have all that much work for people with 2 digit IQs to do at present, we might as well have them hang around high school for four years.

But maybe a refinement to the problem of credentialism is to make the gradations finer, less all or nothing: two years instead of four years. Emphasize the Associates degree for two years of college: in fact, have run of the mill public colleges like Arizona State offer Associate Degrees for completing two years of classwork. Similarly, high schools could offer Associate High School Degrees after 10th grade.