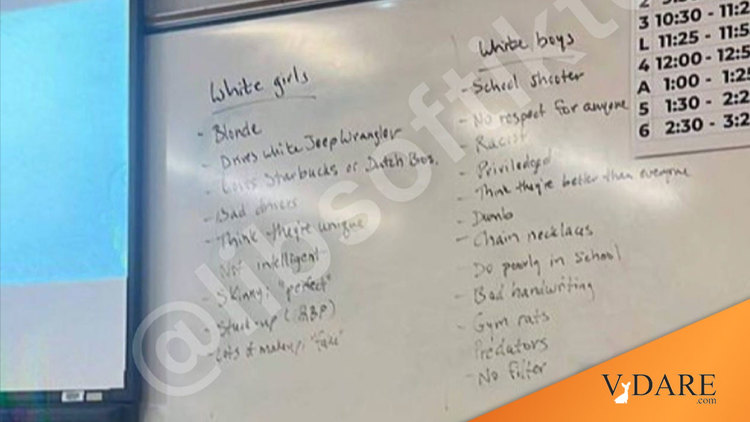 When you realize social media censorship by the left is designed to try and intimidate white people from speaking out and publicizing their dispossession, you are nearing the final boss level.

The heroic Libs of TikTok is earning her place in Valhalla for disrupting the anti-white mindset invading every aspect of American life.

Predator. School shooter. Not intelligent. Privileged. Racist. Dumb. What do these words all have in common? These words were all listed as adjectives used to describe white students in a freshman English class at Scappoose High School in Oregon.

About 25 students walked into Ms. Autumn Gonzales’ classroom at Scappoose High School in Oregon to a whiteboard with two columns, one labeled “White Girls,” and the other “White Boys.” In total there were 21 words used to describe white girls and boys and not one was positive.

According to one student who spoke with Libs of TikTok, “the students were in there for a few minutes and all were looking at the board, not only in disbelief but shock. Several of them took pictures.” Before Ms. Gonzales came into class, the students started asking lots of questions amongst themselves. When Ms. Gonzales entered the classroom, one student raised her hand and asked, “What is the context of the writings on the board?” Ms. Gonzales allegedly told her “to mind her own business.”

Noticing the students were not satisfied with that response, Ms. Gonzales “then tried to spin it to the class.” Apparently, she claimed the lists were from the previous class discussion about “suggestions for a possible play at the school.”

After hearing about the contents on the board, one of the parents immediately contacted the school, forwarded the image, and asked for a call from Principal Jerimy Kelley. The parent told us, “I received a call back from Mr. Kelley approximately two [hours] later, he admitted that he had no less than 25 emails and or messages left about the situation. I asked him why this would be discussed, let alone written up on the whiteboard for all to see in an English class. He had no reason, and said it will be looked into immediately.”

Three days later, after several emails, requests for students to be transferred out of Ms. Gonzales’ class, and demands for her resignation, the school superintendent sent out an email to parents excusing the situation as a teaching exercise in “stereotypes and implicit bias.”

Students and parents aren’t buying it, claiming Ms. Gonzales is an activist who pushes her beliefs on other students. Her Facebook profile suggests they are correct, with a slew of politically charged posts about “privilege” and being “terrified” about the 2020 election results.

The parent continued on in their statement to Libs of TikTok saying, “My child has told me on at least 2 different occasions, that Ms. Gonzales was very demeaning to the students, and to my child personally.”

Could you imagine the outrage that would be coming from the entire nation if the words on Gonzales’ whiteboard were used to describe any other group? Why are we tolerating anti-white racism? Tragically, anti-white racism is all too common in our classrooms. Progressive teachers that push their radical ideology, like CRT into our schools need to be fired.

Gonzales is still listed as faculty on the Scappoose High School website. When Libs of TikTok reached out to the school district, superintendent Tim Porter said, “Thank you for reaching out. I have no further comments than what is included in the letter.”

There’s no white privilege in 2022 America: only the privilege of being attacked for being white in America.