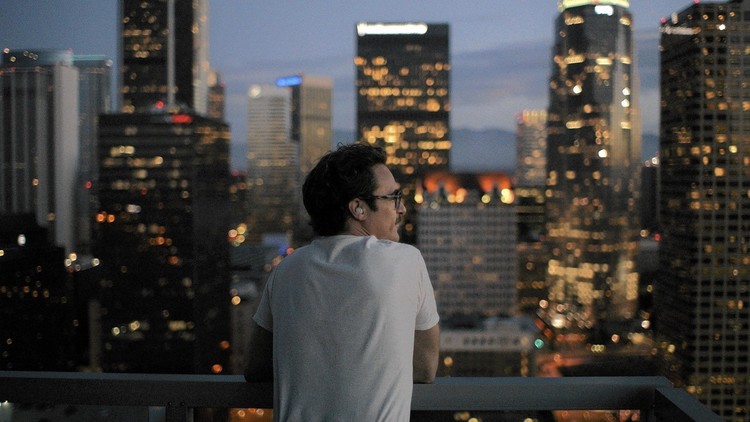 Tall is Good: How a Lack of Building Up is Keeping Our Cities Down

Early in Spike Jonze's new film Her, Joaquin Phoenix's character gazes out his Los Angeles window. As the camera pans, we see not a squat, sprawling metropolis, but a golden-lit landscape of skyscrapers stretching all the way to the horizon.

When I saw the film last Friday night, this scene made me gasp.

It wasn't just the shock of seeing L.A. rendered as a vertical city. It was because this L.A. of the future looked like a place where I wanted to live.

This digitally enhanced, metastasized Los Angeles—an L.A. that grew up instead of out—is almost a secondary character in the film. Jonze tapped graphic designer Geoff McFetridge and production designer K.K. Barrett, and also consulted with architect Elizabeth Diller on the look of L.A.'s future, which—for once—was blissfully free of those dystopian stereotypes. Even against the bleak narrative (no spoilers, don't worry!) the city around the characters is bustling, colorful, vibrant. It's a gorgeous world of tall buildings, mass transit, and busy sidewalks.

Dare I say, this movie made density beautiful.

Beautiful density is, of course, a reality for many cities; some of Her's most dramatic shots were filmed on the skyways and skyscrapers of Shanghai. But here in L.A.—like many cities that aren't Shanghai, or Tokyo, or New York—many people are doing everything in their power to suppress this future, citing detrimental side effects from building heights, whether it's shadows or earthquake danger. Even some already dense cities make it impossible to secure air rights, pass ridiculous parking restrictions, and work hard to incentivize low-rise development.

But there is a huge problem looming larger than any skyscraper. Many major cities are experiencing a housing shortage which is pricing out large swaths of their populations—the workers, the creators, the young'uns. We need to start thinking big—or, rather, tall.

In theory, most of us know density is good for us—it allows us to live closer together, share resources, save energy, and stay safe. But we like the idea of skyscrapers right up until the point where one is constructed next door.

Suddenly, we lament that a tall building might obscure our view, or darken our perfect afternoon sunlight. There is an ongoing sentiment that density should be for someone else. I should be able to keep my car and my yard, while my neighbors get a subway and a public park.

Anti-skyscraper urbanist Jane Jacobs argued for a "proper density," which it can be assumed looked a lot like the typical 1960s Greenwich Village street that she canonized through her writing.


Jane Jacobs liked her own neighborhood. Most people grow fond of where they live. I've liked every neighborhood I've lived in (except the one that had drug addicts shouting all night for their dealer Eddie to buzz them in so they could get their fixed — that started to get on my nerves). This is not to dismiss Jacobs, a wise woman, but urban planning mostly works by who it attracts and who it repels, not by the re-engineering of souls.


With this reasoning, we'd organize all the residential buildings into neat four-story walkups and go to work in the skyscrapers (an equation which obviously does not work out in today's cities). Jacobs was fearful of those towers sprouting throughout Manhattan at the time, which she believe took away a neighborhood's diversity and sense of community.

However, that doesn't seem to be the case. Hong Kong, which has more buildings over five hundred feet tall than any other city in the world, has been the muse of photographer Michael Wolf, who captures the towers as well as the people living inside them. These photos are shocking at first in their overwhelming scale. But 80 percent of the residents Wolf interviewed said they were happy, thanks to the sense of community. "The important lesson to be learned is that it's not space which is important for humans," Wolf told Atlantic Cities. "It's your neighbors."

For example, in Chicago Cabrini Green and Sandburg Village were modernist highrise complexes that were built about a mile apart at about the same time. The former was public housing that all the white residents soon fled, while the former was a for-profit proto-yuppie haven.

The unmentionable fear, of course, is running out of good neighbors. There are only so many to go around. And the American establishment has had as its policy for decades to make the population less white, more diverse.

Obviously, immigration policy interacts in all sorts of ways with urbanism policy. The nice liberals of Beverly Hills have been resisting building the L.A. subway through Beverly Hills for the last 28 years. And if that mountain is finally climbed, the so-called Subway-to-the-Sea will still stop four miles from the sea because nobody has a clue how to get the People's Republic of Santa Monica to agree to a subway.

But you aren't supposed to think about that. Thus, in the movie Her, the population of Future Los Angeles has grown immensely, but almost all the characters are attractive white people.

The other issues with high rises are traffic and that American white people don't breed in them. They are like zoo creatures — to get them to reproduce, you need to take them out of small cages and put them in big enclosures. In Her, there is only one child and she lives in what appears to be the only single family home with a yard in Future Los Angeles.

One of the best moments in the new movie Her is watching Joaquin Phoenix ride an elevated train through a Los Angeles of the near-future, dance through a bustling subway station, and emerge at the edge of the Pacific Ocean.

The scene got a surprised laugh from everyone at the screening I attended. After years of nimby battles and funding shortfalls, director Spike Jonze had just completed the Subway to the Sea!

Of course, it's the people who have upcoming movies screened for them who have done the most over the decades to keep the LA subway out of the liberal westside of LA.

By the way, is this Google driverless car thing ever going to happen? If it does, who will take public transit then if you can sit in your own car and watch videos while Jamesbot drives you right to your destination? (Note, I'm not saying it's going to really happen.)