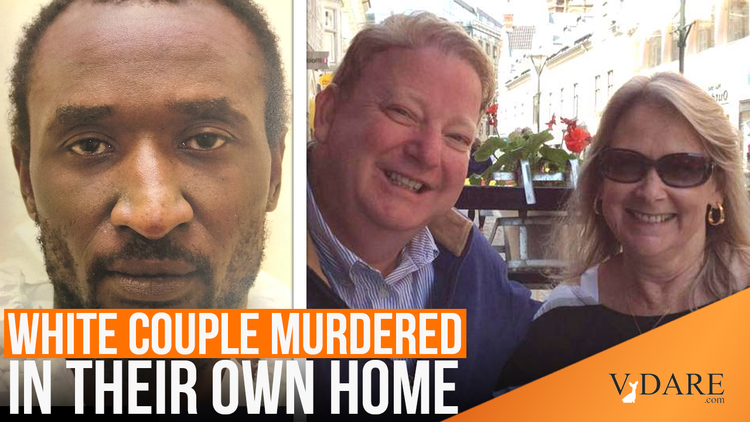 Her Name Is Edie Yates Henderson, His Name Is David Henderson: White Couple Violently Murdered In Their Own Home By A Black Male In A "Random" Act

Just don’t mention what happened to Edie Yates and David Henderson in their home, in what authorities are calling a “random act” of violence.

The white couple were violently stabbed to death in an “absolutely horrific” crime scene by a black male.

Police have made an arrest in the killings of former Lakeland city commissioner Edie Yates Henderson and her husband David Henderson. Marcelle Waldon, 36, is charged with 10 felony counts, including first-degree capital murder in connection with the killings, which happened at the couple’s home on Lake Morton Drive, according to police.

Police believe Waldon got into the home through an unlocked door, and said the crime scene was “absolutely horrific” after he allegedly stabbed the couple to death. Police believe Waldon had tried to set their home on fire. When they got to the home, the stove was “gassed” and every single burner had been turned on, police said.

They described the act as random.

“I’ve been doing this for 32 years and I can count on one hand the number of times that the victim has no relationship, and we can find no nexus between the victim and the suspects, so it’s extremely rare for something like this to occur,” Det. Sam Taylor of the Lakeland Police Department said.

Police said someone nearby saw Waldon leaving the home with jewelry and other personal items. Police also recovered a 2016 Audi that was taken from the home and set on fire near Oregon Avenue.

“We think that it was a random act. We don’t, as far as we know – have not been able to locate any relation between him and the victims,” Taylor said. “There may in fact be a relationship that we’re able to determine down the road, but we do not at this point in the investigation have any reason or any reason to believe that he knew either one of the victims at all.”

He is being held at the Polk County Jail without bond. He appeared in court Thursday and said very little to the judge.

“I want to be very honest with you. I worked with Edie very closely for 12 years as a city commissioner. I had a tear fall from my eye. I was just in shock,” said Kevin Cook, a Lakeland city spokesman and family friend.

Her Name is Edie Yates Henderson. His Name is David Henderson. A white couple violently murdered in their own home by a black male in a “random” act.

Were white privilege real (and where America truly a nation dominated by a white supremacist power structure in need of dismantling), you’d be hearing about what happened to the Henderson’s on an endless 24/7/365 loop.

Odds are, this is the first you’ve heard of what happened to them.

White privilege is a myth. Hiding the reality of black criminality is the truth and the primary function of our corporate media.