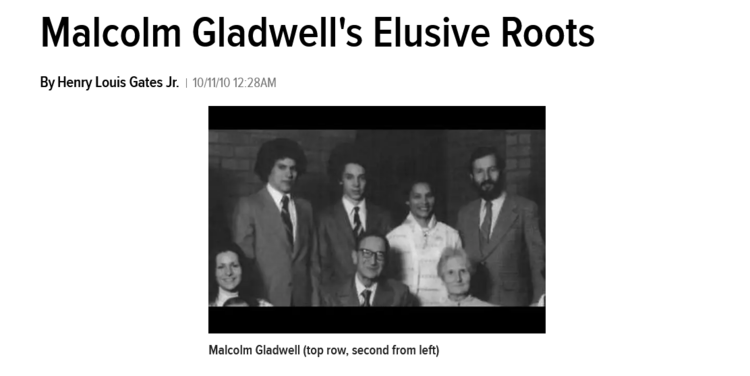 Harvard professor Henry Louis Gates is continuing his series of DNA and genealogical inquiries into the makeup of various celebrities. The usual pattern is that the celebrities turn out to be a little whiter than they had hoped. For example, Mexican-American actress Eva Longoria turned out to 70% European, which disappointed her because she thought she'd be more like 70% nonwhite.

Now Gates has an article in The Root about New Yorker writer Malcolm Gladwell's genealogy. Gladwell's own discussions of his family tree (English on his father's side, Northwest European, Jewish, and middle class mulatto on his Jamaican mother's side) have always struck me as well-adjusted, without much in the way of Obamaesque self-torment. His affection for both his parents is clear. Growing up in Canada, he had pretty dispassionate opinions on race. He didn't seem to possess an Obama-like realization of the how far you could go in America on being part-black until after he'd already become a star in New York with his first bestseller The Turning Point, at which point he finally grew his Richard Simmons-like 'fro that is the only thing that helps you notice that he's part black.

The last (and best) chapter in Gladwell's recent bestseller Outliers concerns his Jamaican free-persons-of-color family tree. He drew from his family history an innocuous conclusion about how everybody in Jamaica could grow up to be a New Yorker writer if not for the discrimination that his middle class mulatto ancestors practiced by not marrying blacks, but it seems likely that his ancestors drew opposite lessons from their history about the importance of careful mate choice.

So, the only thing Gates can trip Gladwell up on is his pride in there being a slave or two not very far back in his family tree:

In the end, we failed to find a single slave in Malcolm's Jamaican ancestry. What's more, we found a stunning instance of the opposite: black slave owners on the family tree. ...

This means that Malcolm's fifth-great-grandmother, a free woman of color, owned slaves. She even spelled one of them out by name, leaving her slave "Ruthie" to her grandson, Malcolm's third-great-grandfather Benjamin Samuel Levy, another free man of color.

"Oh my goodness," said Malcolm, stunned. "The kind of mental jujitsu you have to go through is quite remarkable. It was a class-based society, and so color was class, class was color. There it is. How far back in her history do we have to go, do we think, to find a slave? Her mother or maybe her grandmother?"

I told Malcolm that we didn't know. Margaret Mullings is as far back along that line of his family as we could go. Her mother, most likely, was not a slave. But beyond that, it is unclear. Obviously, Malcolm descends from slaves at some point in his family tree: every black person in the New World, except for recent immigrants from Africa, did. But his ancestors did not stay slaves for very long. And as soon as they were free and could afford to do so, it appears that they began to buy slaves themselves.

Malcolm quite correctly perceived Margaret's decision to own slaves as a class issue. "I'm assuming it's a way of underscoring your new status," he said. "If you are a member of this special privileged class and you would like to heighten your position and assert your whiteness, having a slave is certainly one sign of doing that, isn't it?"

The answer to that question is, of course, yes. But I also tend to think the issue was perhaps simpler, more crudely economic. Margaret Mullings had a farm; she needed workers, and the workers were slaves. That was the system. Does that let her off the moral hook? No. But it was the system.

It would be interesting to find out how far back in the President's African family tree you'd have to go to find slaveowners.