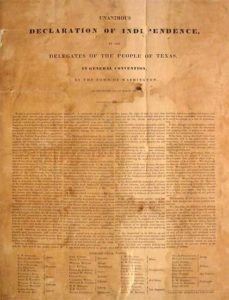 Today is Texas Independence Day, celebrating the day in 1836 when, as Wikipedia recounts

the adoption of the Texas Declaration of Independence on March 2, 1836. With this document signed by 59 delegates, settlers in Mexican Texas officially declared independence from Mexico and created the Republic of Texas.

It's important to remember that the Texans in this story, the martyrs of the Alamo, and victors of San Jacinto, were the Good Guys and the Mexicans were the Bad Guys. Not everybody in Texas feels that way:

Hispanics, most of them of Mexican descent, surpassed Anglos as the largest ethnic group in the city [of Houston] in the 2000 census and are about 42 percent of the population. One of every three Texans is Hispanic, and they want a review of the Anglo-centric history the state has long celebrated [TEXAS INDEPENDENCE DAY 1836: The battle then and now By LORI RODRIGUEZ, Houston Chronicle, March 2, 2006].

That being said, we shouldn't forget the lesson the Anglo settlers in formerly "Mexican Texas" taught, which is that "Immigration Has Consequences"—see  Linda Thom's Lessons From A Short History Of Texas,

“In obtaining land grants in Texas, Anglo immigrants agreed to become Mexican citizens, obey Mexican laws, accept the official Catholic faith, learn Spanish, and take other steps to become fully assimilated as law-abiding citizens. However, over the years, it became clear that these settlers, now Anglo-Mexicans, were not becoming integrated into the nation and that Anglo immigration had become a problem . . . The strains and disagreements ultimately led to the Texas Revolution in 1835.