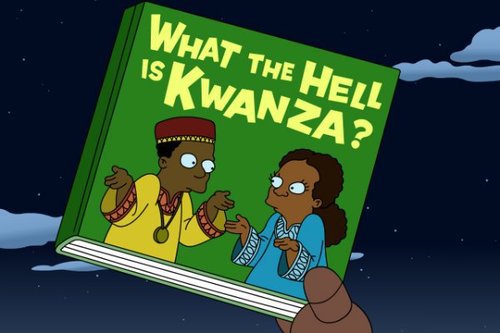 Is Kwanzaa still a thing?  I haven't heard much about it this year.

Just in case it is still a thing, and in lieu of a Radio Derb podcast this coming weekend, here is what I had to say about Kwanzaa on January 3rd this year.

One of the more embarrassing manifestations of American white liberal guilt is Kwanzaa, the bogus holiday invented by the black communist psychopath Ron Karenga in 1966.

Kwanzaa has been mocked and debunked so comprehensively, by so many capable writers, it's a wonder the white liberals still cling to it. For recent samples of those debunkings, I refer you to the December 29th pjmedia blog by Canadian conservative Kathy Shaidle, title "Kwanzaa: TV Station Reports on Non-Existent Parade for Imaginary Holiday," then Thomas Martel's Christmas Day commentary at VDARE.com, title "GOP Kwanzaa Watch Begins …," and best of all the December 23rd column by Ann Coulter, a tour de force of well-informed polemical writing, title: "Happy Kwanzaa! — The Holiday Brought to You by the FBI."

The actual offenses for which Karenga served time were felonious assault and false imprisonment, after he kidnapped and tortured two women, both black.

"Karenga's invented holiday is a nutty blend of schmaltzy '60s rhetoric, black racism and Marxism … Kwanzaa praises collectivism in every possible area of life … When Karenga was asked to distinguish Kawaida, the philosophy underlying Kwanzaa, from 'classical Marxism,' he essentially said that, under Kawaida, we also hate whites."

In giving prominence there to Ann Coulter I don't mean to slight the other commentators I mentioned, both very good. Kathy Shaidle has in fact made something of a career of mocking Kwanzaa. She is the author of a satirical poem about Karenga and his made-up holiday. I only have time to quote one stanza, quote:

Your kids will now celebrate Kwanzaa in school!"

And so on. Somehow, though, this fake holiday, derived from no religion or genuine custom, inspired by no ideas but a coarse, crude, debased version of Marxism, somehow it staggers on. I guarantee that if you are listening to Radio Derb in the U.S.A., somewhere a few miles from you this past few weeks, children in some elementary school have been taught to sing a Kwanzaa song.

You can get people to believe anything, apparently. The level of stupidity in the world is scary.

We can take some comfort from the fact that Kwanzaa observance seems to be declining. Here's a report out of the Associated Press, December 26th, headline: Interest in Kwanzaa declining, experts say. Sample quote:

"Some blacks rejected the concept of Kwanzaa all along, considering it a pagan holiday and taking issue with its founder, a black nationalist and an ex-con (convicted of torturing two women)."

As often happens, those blacks are showing more sense than the white liberals who fawn on them.