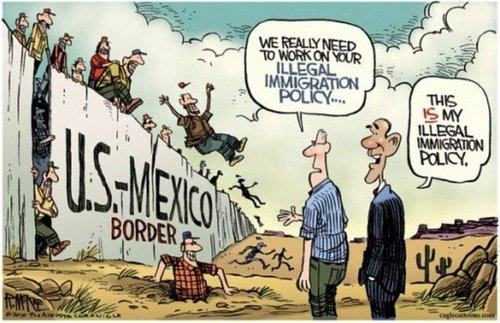 In the December 18th podcast of Radio Derb I said the following thing:

Watching Tuesday's GOP candidates debate, and then Senator Sessions' fine speech, I have to allow that there is at least some nominal diversity in the GOP. It never seems to be able to manifest itself in legislative action, but it's there in some potential form.

I actually quantified this a few months ago, in the March 7th Radio Derb broadcast I alluded to earlier. I went to the NumbersUSA website and looked up the immigration score cards for congresscritters from both parties. NumbersUSA gives every congressperson a grade, from A+ down to F-, on immigration issues.

Now the Democrats. Democratic House members: A or A+, zero percent; F or F-, 99 percent. For Democrat Senators the unity was even more solid: 100 percent, every single one, was graded F-.

As I said at the time, quote from myself: "Where congressional Democrats are concerned, we're not even in the U.S.A. any more: this might as well be the Supreme Soviet. The President doesn't have to work these guys; he just has to stroll into the House chamber once a year and bask in the applause." End quote.

A friend has pointed out that it was a bit unfair to write about these scores before the new Congress had had time to settle in, so I thought I'd do an update.

In a blog post, furthermore, I can do what I can't do over the podwaves:  offer a visual representation of the scorecards.

So here goes: NumbersUSA congressional grades as of December 20th. 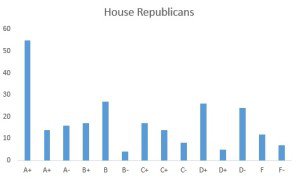 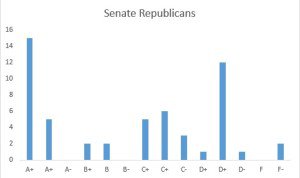 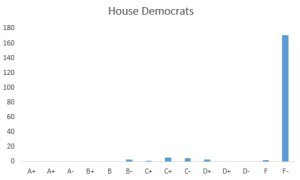 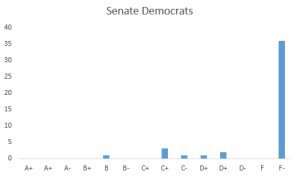 So yes, Virginia (Dare), where the National Question is concerned, there truly are two political parties:  one with a diversity of opinion, the other wellnigh solid for open borders and demographic transformation.