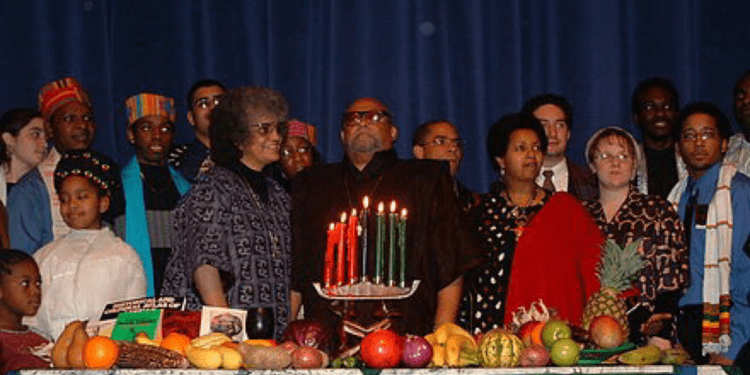 See also Happy Kwanzaa! The Holiday Brought To You By The FBI by Ann Coulter

Recall that last year, in an official statement, Republican National Committee (RNC) Chairman Reince Priebus extended his “best wishes” to Kwanzaa celebrators. His statement was evidently not a gag. Kwanzaa is clearly becoming an element in the destructive bipartisanship emanating from the capital. [Conservatives Furious That Obama, Like Bush, Issued Kwanzaa Message, by Jon Perr, Crooks and Liars, Dec. 27, 2011].

Last year, RNC Co-Chairman Sharon Day seconded to Priebus’ statement: “Kwanzaa is a wonderful opportunity for all of us to honor the importance of family and community, and it reminds us of the great diversity in America. Happy Kwanzaa!”[RNC Statement Commemorating Kwanzaa, December 26, 2013]

Or the diversity that, as political scientist Robert Putnam notoriously concluded, causes “people living in ethnically diverse settings” to experience the following enrichment:

… [T]o withdraw even from close friends, to expect the worst from their community and its leaders, to volunteer less, give less to charity and work on community projects less often, to register to vote less, to agitate for social reform more but have less faith they can actually make a difference, and to huddle unhappily in front of the television.

This is the future that “great diversity” is laying out for us. The GOP Establishment’s response is to pretend that Kwanzaa deserves celebration, while funding executive amnesty.

Was the GOP statement a harmless gesture towards pro-Kwanzaa voters or a fatal act of pandering, or? That all depends on what kind of sentiment was behind the statement.

If Priebus and Day didn’t mean what they said, then it’s all just political schmaltzing and ordinary insincerity. But if they actually believe that Kwanzaa deserves to be recognized and praised, then we’re all in big trouble.

There are good reasons to think that Priebus really is a dangerously naïve. For instance, the epic dressing down Chris Matthews gave to Priebus on Morning Joe was one sign that the GOP was floundering prior to the 2012 presidential election. On national television, Priebus meekly sat still while Matthews angrily and loudly accused him of “playing the race card” against Obama.[August 26, 2012] Say what you will about Matthew’s aggressive persona, it is a sad thing when the RNC chairman can’t fire back at a baseless accusation of racism. In fact, it was a sign of weakness, and that weakness stems from conservative acceptance of multicultural dogma.

“I’m not racist” can’t be the best response the GOP can come up with.

A key tenet of multicultural dogma is that Republicans have something to apologize for when it comes to race. Evidently, RNC Co-Chairman Sharon Day believes this dogma. In addition to her Kwanzaa comment about America’s “great diversity,” her website says that “she has made opening the doors of our party to women and minorities a priority.”

But don’t the doors have to be previously closed to minorities and women if Day is going to be able to open them now?

It seems that the GOP’s highest level of leadership is halfway buying into the Leftist narrative on race.

The masochistic drivel coming from the highest levels of the GOP is a warning sign—if not a death rattle. The GOP leadership simply cannot be trusted to walk the line between messaging and pandering. The treasonous Executive Amnesty cave-in just proved that.

Many Americans like to say that diversity is our strength, although they’ve rarely thought the matter through. This is understandable, given that rhetoric is cheap—in the moment. But there is a long-term cost to repeating diversity babble, including Kwanzaa greetings: It renders our historic nation philosophically and rhetorically defenseless in the face of government-sponsored demographic trends that are transforming our society.

Priebus, Day, and the multiculti wing of the GOP are in the grip of a delusion. They are struggling to appeal to groups who have no interest in the GOP platform. In the process, they are signaling to conservative voters of all races that the GOP will not resist Leftist agendas (amnesty, deficit spending, stimulus, Kwanzaa, multiculturalism writ large) in order to pander to unlikely voters.

In short, the GOP elites hate their own ethnicity and despise their base. But they expect you to continue voting for them.