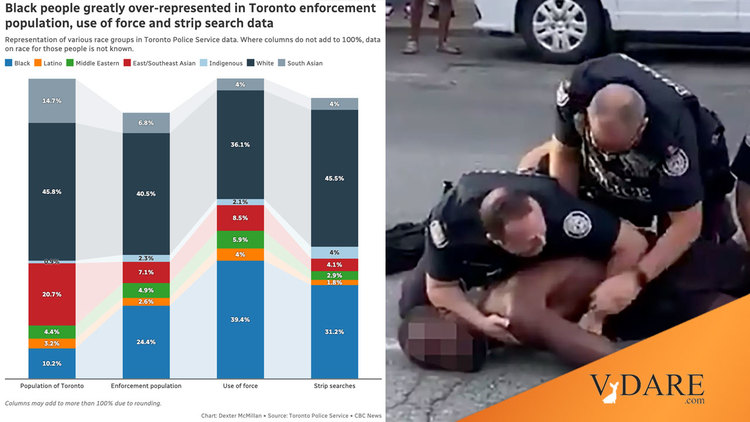 The Unasked Question In Toronto "Use Of Force" Kerfuffle: How Much Force Are Blacks Using Against Toronto Cops?

‘We do not accept your apology,’ activist tells Toronto’s police chief after race-based data released

An expansive Toronto police report released Wednesday confirms what many racialized people in the city have long said: Black, Indigenous and other diverse groups are disproportionately affected by use of force and strip searches by officers.

“As an organization, we have not done enough to ensure that every person in our city receives fair and unbiased policing,” he said.

“As chief of police and on behalf of the police, I am sorry and I apologize unreservedly,” Ramer continued. “The release of this data will cause pain for many. We must improve and we will do better.”

The apology was not welcomed by Beverly Bain from the group No Pride in Policing, which describes itself as a coalition of queer and trans people formed in support of Black Lives Matter Toronto and focused on defunding police.

In a tense moment during the news conference, Bain slammed Ramer’s response to the data.

“Chief Ramer, we do not accept your apology,” she said, putting a point on an impassioned speech about how Black, Indigenous and other racialized groups have had to deal with police in the city.

I’m guessing woke Canadians worry about a conundrum that woke Americans tend to be too obtuse to notice: If Race Does Not Exist, why are we always talking about the black race? Well, you see, that’s because they aren’t a race, but they are “racialized.”

… Among its findings: Black, Indigenous and Middle Eastern people were all overrepresented in the number of “enforcement actions” taken against them relative to their total population in Toronto. For Black residents, it was by a factor of 2.2 times.

In other words, Black people made up about 10 per cent of the city’s population that year but faced 22.6 per cent of police enforcement, which includes arrests, provincial offences tickets, cautions and diversions. From a different recent CBC article:

The data, which took more than a year and a half to compile, found 75 per cent of Canadian homicide victims are racialized Ontarians, and 44 per cent identified as African, Caribbean or Black.

Over my lifetime, I’ve read at least 1,000 articles about how everybody is shocked, shocked to discover that local blacks get in disproportionately more trouble with the cops. I’ve never seen a local story (as opposed to an analysis in City Journal by Heather Mac Donald or the like) that says: “Local blacks get in more trouble per capita with the police than do other groups, but the exact same pattern is seen in every other city in North America, so it’s probably not the local cops’ particular fault.”

Can anybody link to such an article?

I did read an interview in Toronto (I think by David Frum’s sister) asking visiting top cop Bill Bratton why murders are increasing, and the former police chief in NYC, LA and Boston replies something like, "I don’t know, but let me ask: Are they all Jamaican drug dealers?"