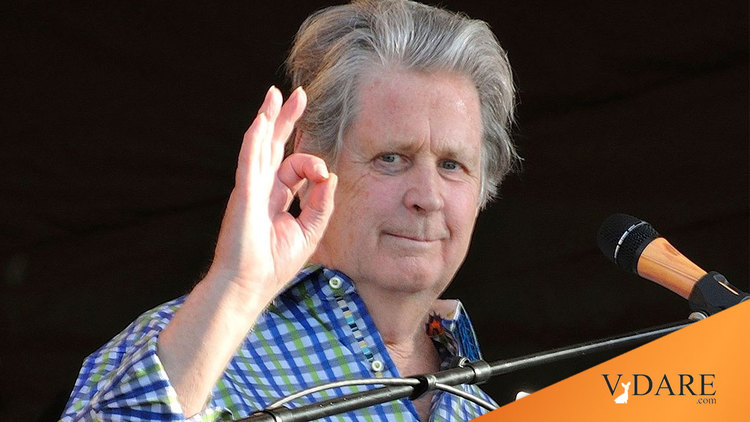 Tom Stoppard’s 2006 play Rock ‘n Roll is a rather austere work about the early 1960s Pink Floyd of the Syd Barrett era rather than the Dark Side of the Moon or “Comfortably Numb” eras and the Czech dissident band Plastic People of the Universe. It really only ignites at the end of the first act when the Czech dissidents listen to the Beach Boys’ ethereal “Wouldn’t It Be Nice.”

Can't load tweet https://youtu.be/nZBKFoeDKJo: Sorry, that page does not exist

Brian Wilson of the Beach Boys was born just days after his archrival Paul McCartney of the Beatles. Here’s my review of the 2015 biopic Love & Mercy:

Love & Mercy is a superb new biopic about head Beach Boy Brian Wilson’s creative summit in 1966, the year of the groundbreaking Pet Sounds album (featuring the sublime “Wouldn’t It Be Nice” and “God Only Knows”) and follow-up “Good Vibrations” mega-single, the greatest Southern California track ever constructed. The film follows Wilson briefly into his rapid collapse into mental illness and obesity, and then skips to his slow but gratifying recovery in the early 1990s.

This may not sound particularly promising, in part because musical biopics are out of fashion. Further, the Beach Boys’ family melodrama is familiar from two TV movies plus the thousands of interviews Wilson has done over the decades to promote the legend.

Moreover, it sounds gimmicky that two actors who don't look much alike were cast as young Brian (moonfaced Paul Dano, who may be best known as the preacher in There Will Be Blood) and old Brian (John Cusack, whose career also peaked at age 23 when he held up the boom box in Cameron Crowe’s Say Anything…). But then again, Wilson’s face matured unexpectedly from chubby innocence to weathered ruggedness.

Another legitimate concern is that it’s an authorized biography, with the subject’s current wife having much input over script and casting. Melinda Wilson chose Elizabeth Banks to play herself, the Cadillac saleswoman whose love rescues a fortysomething Wilson from enslavement to his quack psychiatrist (Paul Giamatti). But Mrs. Wilson’s self-image doesn’t make use of Banks’ sardonic alpha-blonde sense of humor, currently on display in her hit Pitch Perfect 2, which she directed.

In partial defense of the megalomaniacal Dr. Eugene Landy, his “24-hour therapy system”—basically, having a glowering bodyguard hover around Brian—did reduce the quantities of drugs and hamburgers Wilson could wheedle out of fans and fellow celebrities who couldn’t help liking the overgrown kid no matter how many times he’d let them down. But much like with Britney Spears and her parasitical keeper a half-dozen years ago, Landy kept his meal ticket dependent upon his prescription medicines.

Finally, the Beach Boys have long divided fans of 60s rock into three camps, at least since the band suddenly became unhip when they failed to show up to headline the 1967 Monterey Pop Festival, which wound up being dominated by Jimi Hendrix. There are those who love them for their early hits about California’s golden age of surfing and cars (such as “I Get Around” and “Fun, Fun, Fun”); those who dismiss them for these early hits; and finally those, often musicians and writers, still agog over Wilson’s 1966 peak, which motivated the Beatles into striking back the next year with Sgt. Pepper.

Veteran movie producer-turned-director Bill Pohlad, son of the late billionaire owner of the Minnesota Twins Carl Pohlad, is firmly in the third camp. And I’d say he has now won the three-way debate, and in the best way possible: by making a work of art about how Wilson made his finest works of art. Few musical biopics before this rich man’s labor of love have paid as close technical attention to what went on in the studio, which, after all, is really why we care about Wilson.

Dano is tremendous as the 23-year-old Brian, a seemingly guileless musical savant who just wasn’t made for these times. Yet Wilson responds to the challenge posed by the Beatles’ 1965 Rubber Soul album by disappearing for half a year into the studio, where he commands a crew of ace studio musicians in expanding the limits of sound. My only complaint about Dano’s performance is that the movie star isn't quite as good-looking as his subject. Part of Wilson’s appeal has always been the irony that he’s this huge all-American galoot who is emotionally sensitive to the point of fragility.

It’s perhaps not coincidental that the two prime American inventors of the “studio as instrument” concept both went nuts: Wilson’s idol Phil Spector turned bad crazy after his “River Deep, Mountain High” failed to catch on in 1966, and Brian Wilson went sad crazy trying to record Smile in 1967.

But in the meantime…Wilson’s Late Protestant religious music inspired the Beatles’ Sgt. Pepper.