We residents of the Bay Area love our unique landmark. The bridge never fails to inspire with its beautiful form and how it frames natural vistas of land meeting ocean. 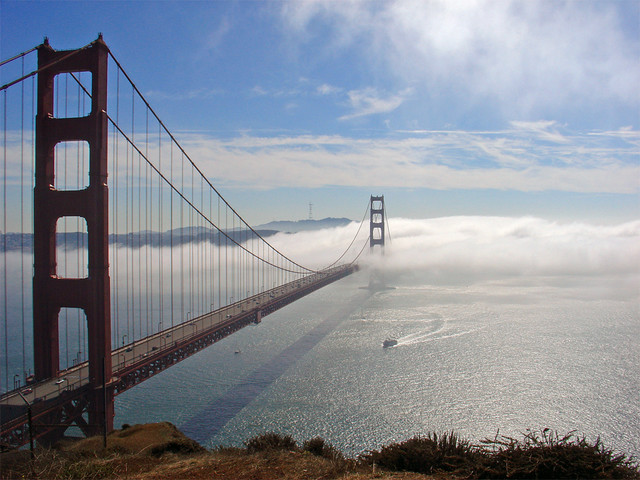 The Chronicle has posted its photo archive of bridge pictures here.

One little-known fact about the bridge is how it was financed. The project was planned during the Depression, when money was short and banks were edgy. The citizens voted to put their personal property up as collateral to get the bridge built.

[. . .] On November 4, 1930, voters within the Golden Gate Bridge and Highway District’s six member counties (San Francisco, Marin, Sonoma, Del Norte, and portions of Napa and Mendocino) went to the polls on the question of whether to put up their homes, their farms and their business properties as collateral for a $35 million bond issue to finance the construction of the Golden Gate Bridge (Bridge). For some, the timing of the bond election was considered economically reckless as it would create bonded indebtedness during the Great Depression. Others said bridge construction represented the economic relief needed from the Great Depression. After the vote, it was clear the people believed in Chief Engineer Joseph Strauss’ vision – 145,057 voted in favor and 46,954 against it. [. . .]

Perhaps I’ve become hardened by so much diverse immigration, but I can’t imagine such sacrifice for the greater good taking place in today’s balkanized California. Diversity decreases trust and lessens social capital, as sociologist Robert Putnam has observed.

The corollary is that loyalty and community cohesion are strengthened by sharing language, values and the sense of common history. Sadly the California where citizens voted to put their own properties on the line for a major public improvement is long gone, replaced by a society that says its allegiance is to the idea of diversity.