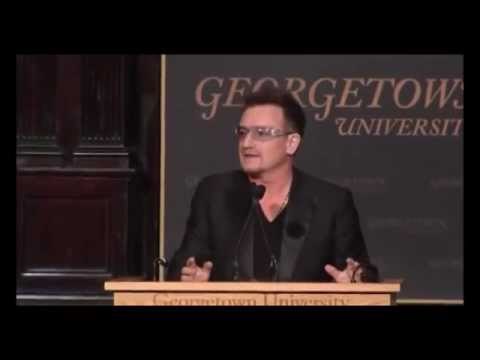 Happy 4th Of July From Japan!

Here is "Bono Speech at Georgetown - Keeping Faith with the Idea of America."

Bono giving a speech at Georgetown? That's a half-literate Irish rocker speaking to an academic forum at a premier Jesuit-run American university. It was November 2012, but the theme is as pertinent as ever.

And what does Mr. Bono say from behind his trademark dark shades? Rousing words — he does have that Irish thing — and tickling the patriotic fancy of "conservatives."

America, see, is an idea. The greatest idea since before the flushing toilet and sliced bread. The idea is that we are created equal and that life is meant to be enjoyed. And we are, all of us now, he asserts, a little American. In Mogadishu and Fallujah too, no doubt, as per widely-accepted Neocon wisdom.

Therefore, Bono asserts (full speech is here), that the United States must "prevent" budget cuts that provide for "life-saving" international aid. As the Georgetown University synopsis relays (ibid.), Herr Rock'n Professor clinches his thesis with the invincible argument that "Without U.S. aid to struggling countries, the power shift sparked by Arab Spring might not have been possible."

Indeed, it would not have been possible. Great shifts in power have been enabled by American taxpayers' money dispensed by the insane from Georgetown’s neighborhood. Power to the Muslim Brotherhood in Egypt, Al Qaeda in Libya, Boko Haram in Nigeria (with a looted Libyan arsenal, enabled by Washington nincompoops), ISIS in Iraq, barbarian Muslim lunatics in Syria,  Taliban in Afghanistan, and cells of the above in Mexico or already inside the United States, sucked in with the tide of "DREAMers."

Of course, the United States is as much an idea as you or I or my cat. It’s a nation: an organic entity created by and composed of a specific people, and rooted in a specific territory. John Jay wrote in Federalist #2:

“Providence has been pleased to give this one connected country to one united people — a people descended from the same ancestors, speaking the same language, professing the same religion, attached to the same principles of government, very similar in their manners and customs, and who, by their joint counsels, arms, and efforts, fighting side by side throughout a long and bloody war, have nobly established general liberty and independence.”

Remember this, as Neo-Marxist multiculti propaganda, popular pap and cant, media-and-entertainment fostered imbecility, global Big Biz machinations, Democrats’ treason, Republicans’ stupidity, and the whole world’s Camp of the Saints pull this country from under your feet. Celebrate the ravaged, dying nation, not the idea.

Takuan Seiyo is a Central European 1960s American immigrant who says he would not have qualified under John Jay’s definition, except on a probationary basis. Having been ethnically cleansed from California, he now resides in Japan and writes about the America he knew.