Boko Haram Jihadists May Not Respond to Hashtags

Over in Hollywood, socially conscious stars have been shocked to learn that the Boko Haram Islamic terrorists were bad guys, having abducted hundreds of schoolgirls for slavery. Actress Angelina Jolie (arguably the leading Hollywood do-gooder with her title of former UN Goodwill Ambassador) said the kidnappings were “Evil.” Other concerned stars shared photos of themselves with signs reading #BringBackOurGirls.

How could liberal entertainers have known? Secretary of State Hillary Clinton refused to classify Boko Haram as a terrorist group, despite urgings of security experts, so the African group could have been misunderstood poor people looking for a better life.

But if the Hollywooders had been paying attention, Boko Haram would been a familiar name, because they have been killing up a storm in Nigeria for years. As the BBC noted February 25 (Nigeria school raid in Yobe state leaves 29 dead):

Thousands of people have been killed since 2009, when Boko Haram launched its campaign to install Islamic law.

CNN recently played a little catch-up, reporting on a Nigerian man in Houston getting medical treatment for a Boko Haram attack in 2012. At that time, a bunch of Allah’s Boko gangsters broke into a church and shot everyone there. Only one man survived out of 14 in the church, and he is still being put back together. 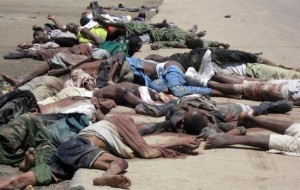 In America we hear almost nothing about the Islam-caused slaughter in Africa, unless it is a media show-stopper like the Nairobi shopping center attack by al-Shabaab last September that killed 76. But Islam is daily conquering by the sword, corpse by infidel corpse, whether the West notices or not.

Boko Haram is a rough bunch, but probably no worse than the al-Shabaab killers in Somalia. And in the Philippines, the Moro Islamic separatists have been waging a war against the non-Muslims for 45 years in which more than 120,000 people in the country’s south have been killed. A peace treaty has recently been signed, where the Muslims get an “autonomous region” in return for their ceasing to kill infidels. For a while at least, but that’s how Islam’s convert-or-die strategy has succeeded over the last 1400 years.

HOUSTON (CNN) – We’re learning more about the brutal tactics of the Boko Haram terrorist group that abducted 276 schoolgirls in Nigeria on April 14.

A lone survivor from a 2012 shooting massacre carried out by Boko Haram gunmen at a Nigerian church talks about the event.

The scars on his face reveal just a fraction of his pain. And his soft-spoken words cannot hide the urgency of his message.

Nzeribe has a warning about the Nigerian terrorist group Boko Haram and their leader Abubpakar Shekau.

“Everything he says he will do, he does them,” Nzeribe said.

In 2012, Nzeribe was a handsome, ambitious banker, and part of the Christian minority in the northeastern Nigeria town of Mubi. Then masked Boko Haram gunman stormed his church chanting “Allah Hu Akbar” or god is great.

“They started shooting everybody, everybody on sight. They shot everybody in the head,” he said.

When it was over, there were 13 dead. Shot in the face. Nzeribe was the only one to survive.

“I knew it was over for me. And the only thing I could do was say a last prayer, which was ‘Blood of Jesus, cover me,’ and that was it for me,” he said.

The bullet from an AK47 blew away his jaw, his lips and part of his tongue. Surgeons in London struggled to rebuild his face.

“I think after my first surgery in London is when they showed me my, they gave me a mirror, yes.” What he saw was “a very different person.”

It was just the beginning of a long road of recovery. More than a dozen surgeries later, and still more to go. Nzeribe is a full-time patient now living in Houston.

He is out of immediate danger, but not free from fear.

The town of Mubi, where he used to live, is about 60 miles from where Boko Haram abducted the 276 young schoolgirls.

Watching the menacing ramblings of the group’s leader on video, Nzeribe says the threats are real.

When asked if he believes the militant leader will sell the girls, he does not hesitate to provide an answer.

So he prays for their safety, just as he once prayed for his own. And hopes the world takes action to stop a group responsible for so much death.