To build on my latest Taki’s column, “Alexander Hamilton: Honorary Nonwhite,” about the war over which Dead White Euro-American Male to kick off the currency to make way for some (not very galvanizing) woman from American history, the current hit musical Hamilton about a heroic Latin American / West Indian immigrant Treasury Secretary rapping his way to America’s financial stability on world bond markets is not the only Broadway musical of this decade about a man on the money. 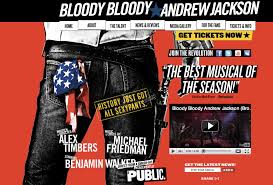 Judging from this highlight clip, the musical portraying the 7th President as a foul-mouthed emo rockstar had artistic problems: e.g., electric guitars and Broadway usually don’t go together well, and the notion of Andrew Jackson as Fall-Out Boy is not one of those slap-your-forehead ideas that you can’t imagine why you didn’t think of yourself.

But, while Hamilton is portrayed in Lin-Manuel Miranda’s hit show as the unquestionable hero of the nearly all nonwhite production of Hamilton, Jackson was seen in Bloody Bloody Andrew Jackson as at best ambivalent … or an “American Hitler.” From Wikipedia:

Near the end, the play reviews Jackson’s legacy and the views attributed to him. Some believe he was one of America’s greatest presidents, while others believe him to be an “American Hitler.” The final scene shows Jackson receiving an honorary doctorate at Harvard. He reflects upon his achievements and his questionable decisions. The show telescopes out and we get a bird’s-eye view of Jackson’s damning legacy and our collective culpability (“Second Nature”).