Here’s a snapshot of the social turmoil unleashed in Germany by Chancellor Merkel’s opening of the nation’s borders, admitting a million Muslims. At a town meeting in Bad Schlema, a grandfather complained about the migrants’ sexual attacks of local girls. The mayor effectively told him and the rest of the concerned citizens to shut up and deal with far less public safety in their community. Fury ensues.

Similar scenes must be playing out all across Europe. It’s yet another reminder that borders are essential to civilization. 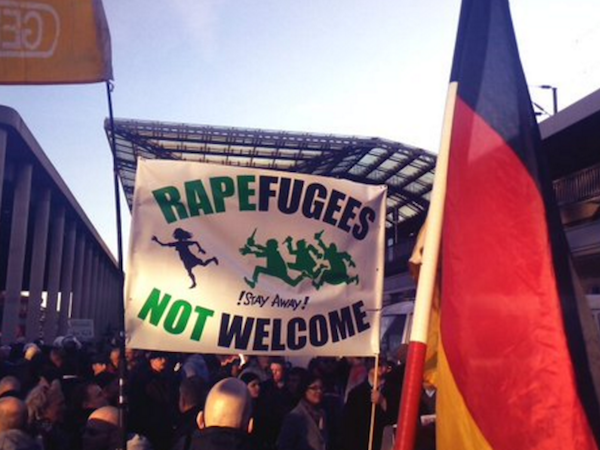 Last Thursday a worried grandfather voiced his concerns about the increasing incidents of sexual harassment of young girls on their way to school by migrants in a meeting in the German town of Bad Schlema. His own granddaughter has been victim of sexual harassment and he fears it will be much worse when girls will wear less clothing in the summer or dress for physical education. The mayor’s reply angered the over 100 citizens who were present: “It’s simple, don’t provoke them and don’t walk in these areas.”

The crowd went furious, some mocked the absurdity of not being able to walk to school in your own town, some demanded he step down immediately. Later the situation escalated and the Mayor threatened to call the police and clear the room because of incitement of hatred (sources below).

He said it’s “technically not necessary to walk near the refugee shelters, there are alternative routes.”

Later the citizens went on how government actions leave them no other choice than drift off to the Right political spectrum. In many cases the so-called “refugees” receive more benefits, better housing and more legal protection than natives. They also face very little legal consequences for sexual harassment, theft and vandalism. Because of the refugee crisis, Germany’s new Right Wing Party “Alternative for Germany” went from under 4% to 12.5% in latest polls.

In Islam, any woman not wearing a headscarf or not dressing modestly is considered “fair game” and is therefore free to rape. The number of rapes has increased dramatically ever since Germany has opened the flood gates to millions of young Muslim men. Police are instructed to cover up the nationality of rapists – this tower of lies collapsed after the huge scale gang sex attacks in Cologne with over 500 women being attacked simultaneously.

More and more reports emerge of “refugee” gang rapes of children as young as 3. Just a few months ago a 7 year old girl was brutally raped on a playground in Chemnitz in broad daylight by an African “refugee”.

TRANSLATION EDIT: It’s difficult to hear, but he might be saying “in 10th grade” and not “under 10″. It”s difficult to make out. Either way he means his young granddaughter.Source for the original story in Germany: Bürgermeister droht: “Ich rufe die Polizei”