Unless you were paying attention, the murder of a Hoover, Alabama man as he went to workout in early January 2016 was probably something you never, ever read about. A platoon leader and 1st Lt. in the George W. Bush war with Iraq, Mike Gilotti is now just another name added to a roll-call few have the time to bother hearing.

Yet another white person murdered by blacks:

A second teen is now charged in the shooting death of a Hoover husband, father and Iraq war veteran.

Authorities today announced a murder charge against 17-year-old Ahmad Johnson. He is charged in the slaying of 33-year-old Mike Gilotti who was gunned down Jan. 5, and then collapsed and died on the front steps of his Lake Cyrus home. 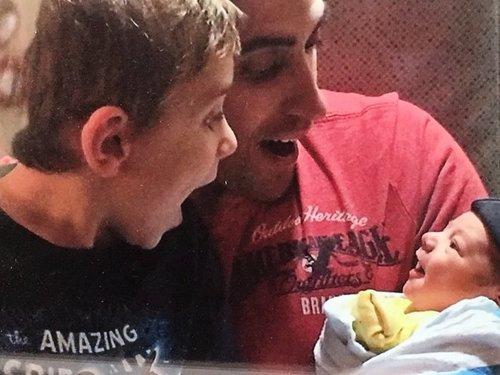 A Jefferson County grand jury six days ago indicted Johnson and 16-year-old Charleston Wells, each on one count of murder and nine counts of unlawful breaking and entering a vehicle.

Johnson has been in custody since Jan. 7, held in Jefferson County's Family Court system. He is now charged as an adult, and expected to be transferred to the Jefferson County Jail where Wells has been held without bond since January. At least two other suspects are in custody on other charges, but they have not yet been named or charged in Gilotti's death.

"Please understand we will continue to investigate this case until we are satisfied that everybody involved is behind bars," Hoover police Chief Nick Derzis said at a press conference held today to announce Johnson's arrest.

Investigators today said Johnson, Wells and the other suspects are members of a Bessemer-area gang called M-tre, which stands for Money Making Mafia. Though they claim to be aspiring rappers, Rector said M-tre members are street criminals who break into cars and commit other crimes to get money. They often post pictures of themselves on Facebook and other social media sites holding guns and money.

"I called them common street thugs at our last press conference and I think that still is an appropriate term to describe them,'' said Hoover police Capt. Gregg Rector. "They're not aspiring rappers, they're criminals. They're criminals who break into cars for a living. In this case, they're property thieves who when confronted by a homeowner, they take that to a whole new level and shoot and kill an innocent person."

"Their motto is 'get money.' When they talk about getting money, that means taking money from you, and I, and people who actually have jobs and earn money for a living,'' Rector said. "Getting money to them means stealing from innocent victims. That's their existence."

Mike Gilotti was just another white American who believed the United States of America still existed.

This is not a cynical or nihilistic point of view, but a reality more and more are beginning to understand.

I grew up in an exceedingly Christian household, but have long lost the faith sustaining the insane reactions of people like Davey Blackburn and the Lashes of Atlanta, who have encountered pure evil and yet found forgiving murderers or would-be murderers a worthy action, even though these black individuals who did the unspeakable harm never asked for forgiveness.

When one reads about the final moments of Mike Gilotti's life, who served in the United States Military and was deployed in the Middle East, the first thought that comes to mind is simply this: do a people who lack the will to live have a future on this earth?

Family mourns man killed at Lake Cyrus home: 'Nothing prepared me to hold my husband bleeding at my front doorstep, with my son yelling ‘Daddy’ and my baby crying in the other room.', WVTM13.com, January 6, 2016

While family members mourn his loss, Hoover police are still looking for a suspect in the death of 33-year-old Mike Gilotti.

The father and Iraq war veteran was killed by a single gunshot as he stood in his Lake Cyrus driveway Tuesday morning.

"I just keep replaying it in my head right now. I just hear that gunshot,” said Heather Gilotti, Mike Gilotti's wife. "I'm struggling with the thought of losing my best friend. I never thought I'd be making funeral arrangements at 32 years old for my spouse."

Heather Gilotti met Mike Gilotti at air assault school in Hawaii before he served as a platoon leader in Iraq. Back home, he was working for an insurance company. She is a physical therapist. The couple are parents to two young children – Russell, age 5, and Kevin, age 1. Life was good until early Tuesday morning, when she heard a gunshot and Mike Gilotti yelling to call 911.

"I opened the door and he fell into my arms, and I tried to do CPR. Nothing prepared me to hold my husband bleeding at my front doorstep, with my son yelling ‘Daddy’ and my baby crying in the other room," she said.

They were planning to go zip-lining Monday for their eighth anniversary.

"I've already told the older one that his daddy is in heaven right now looking down on him and is so proud of him,” Heather Gilotti said.

Faith was an important aspect of life for the Gilotti family.

“I don't think I've had more peace in my heart than right now. I can't explain,” Heather said. “I don't hate this man who did it. I feel sorry for him.”

She said before he lost consciousness, Mike Gilotti’s last words were, “God, forgive my sins.”

He was simultaneously a husband and a father, roles in life he can never fulfill again.

And yet in his final moments on earth, Mike Gilotti bled to death in the arms of his wife as his five-year-old and one-year-old son were nearby.

He never will get to take his wife zip-lining to celebrate their eighth anniversary.