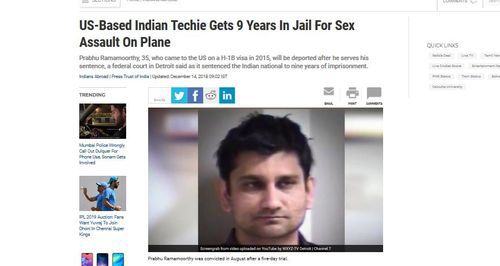 Prabhu Ramamoorthy lived in Detroit with his wife. He is from Tamil Nadu in the south of India and held an H-1B visa to work in a technical position since 2015. The Detroit Free Press described him as a "Rochester Hills man" in their coverage of his trial.

He sexually assaulted a woman on an airplane and during the assault, his wife was sitting in the aisle seat and the victim in the window seat. He was seated in the middle. The details of the assault are grotesque.

Ramamoorthy's wife defended him in court. All the ugly details can be found in the MSM. [Sexual assault on Spirit flight lands man in prison for 9 years, by Tresa Baldas and Ann Zaniewski, Detroit Free Press, December 13, 2018]

After a 5-day trial, the jury took only 3 1/2 hours to find him guilty. The judge sentenced Ramamoorthy to 9 years in prison.  The judge said that he hoped this would deter others from committing such crimes.

Do American men frequently sexually assault women on airplanes? Do they need to he deterred from sexual assault on airplanes? Maybe I missed the news.

Having traveled all over India, I can say that many Indian men do not exhibit good behavior towards women. To get a sense of this, try reading reports of this assault in the Indian press and then read the comments from Indian readers.

Prabhu Ramamoorthy, 35, who came to the US on a H-1B visa in 2015, will be deported after he serves his sentence, a federal court in Detroit said as it sentenced the Indian national to nine years of imprisonment.

Americans are hurt by H-1B visa workers. Moreover, America does not need imported workers, especially those from countries that do not share our values.