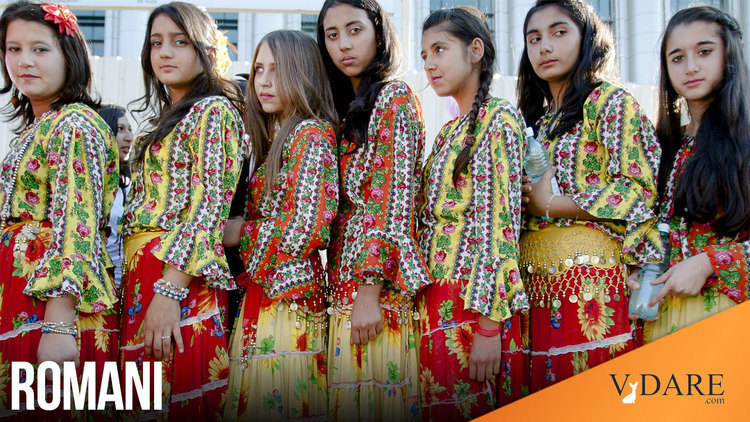 Gypped By Gypsies In Canada

I once wrote a piece about Australia for VDARE.com with the title title: "Nice Guys Get Illegal Immigrants."

Here's another thing nice guys get: Gypsies.  The nice guys in this case are also descended mostly from British settlers, and are even nicer than Australians, if you can imagine that.  Yes, this is a story about Canada—and Gypsies.

It's actually a video, a clip from Ezra Levant's The Source, which is an opinion feature Levant does for the Canadian cable channel Sun News Network.

As usual, in deference to readers who haven't the time or patience to sit through a video (this one's 12m41s), I'll give you a précis and partial transcript (regarding which latter, excuse flying fingers).  That gives me the opportunity to add my own opinions, an opportunity I shall of course no way pass up.

Levant starts off by summoning up traditionally romantic notions about Gypsies.  I don't know about this.  You might say that Carmen is a romantic opera, but Carmen herself is a heartless slut.  The Gypsies in George Borrow's novels are a mixed lot—one of them tries to poison the narrator from sheer "motiveless malignity" (Chapter 71 in Lavengro)—but I don't recall any of them as particularly romantic.

Levant pulls in Cher for support, singing "Gypsies, Tramps, and Thieves."  Uh-huh.  Cher's paternity is Armenian, not Gypsy, and the song isn't particularly romantic, either.

There's another use of the word: the phrase "he gypped me." Have you ever heard that?  It means to be ripped off, to be cheated.  But now it's considered to be politically incorrect to say "He gypped me."  It's being mean to Gypsies, implying they're all cheaters and thieves.

This leads into a riff about how politically incorrect it is to say "Gypsy" nowadays.  And if you thought "Roma" was the term currently approved by PC Central, you're behind the curve:  it's "Traveler."  Levant has a bit of fun with this.

At 3m30s Levant goes into some CYA boilerplate about Gypsies not being a race.  They are not a race, he assures us, they are a—can you guess?—yes, a culture.  Paging Prof. Boas, paging Prof. Franz Boas.

Hmm.  After a thousand years of strict endogamy (diluted only slightly by occasional and opportunistic child-stealing), I'm not sure it's unfair to count Gypsies as a race . . . but I'll wait for the paper from Cochran and Harpending before making up my mind dispositively.

It seems to me that Levant does a bit too much of this CYA stuff.  In view of his past encounters with Canada's cultural commissars, perhaps one shouldn't blame him, but it does drag on.  At 4m02s, with me in square brackets:

Conservatives must believe that any of us and all of us were created in God's image [You sure you want to rule all unbelievers out of conservatism, Ezra?] that each of us has the ability to be good, maybe even to be great [Blank Slate alert!], that life is about a series of moral choices [Well, some of it is], that's precisely why racism is so wrong.  [It's peeing into the wind to say so, I know, but Levant is here confusing racism with racial discrimination.]

But judging Gypsies by their lifestyle is the opposite of racism.  [Not if they're a race, it isn't.  See above.]  It's applying the same standards to their Gypsy individuals as we would to an individual white or black or Asian  bum or hobo.

It's the bigotry of low expectation.  Worse: It sentences each new generation of Gypsies to a life of crime. [We are sentencing them!  With our horrid bigotry!  We are all guilty!]

At 6m23s we get out of the PC boilerplate and into the heart of the matter.

Gypsies systematically abuse children: not just through their child marriages—what the rest of civilization would call "statutory rape" or "child abuse"—but through turning children into un-prosecutable child criminals . . .

Gypsy adults know that they can be charged and jailed for theft, but in many European countries children under 14 are not prosecutable, so young Gypsy children steal in a highly organized manner, handing over their stolen goods to their parents; and whenever the children are caught by police, well, they're just quickly released . . .

In the city of Milan, Italy, for example, police noticed a surge in thefts.  Fifty children were part of the local Gypsy ring, each stealing up to twelve thousand Euros a month the police know about.  The profits were taken by their parents' pimps and by organized criminals back in Romania.

Do Gypsies love their children?  Well put it this way: Gypsy adults were sentenced to 14 years in prison for enslaving children in Italy.  Police discovered that many children were kept in locked sheds at night.

Theft is ubiquitous, especially pickpocketing naive tourists.  And then there are the more violent crimes.

In Italy Gypsies are less than one percent of the population, but they account for nearly six percent of all those arrested for murder. These are not racial comments.  No race does this.  [Uh . . .]

It is not a racial attribute to steal.  It is a sick culture with an immoral code of living.  No wonder Gypsies are despised.

And over the years they have been mistreated and abused.  During the Second World War it's estimated that hundreds of thousands of Gypsies were rounded up by the Nazis and sent to die along with six million Jews.  [Levant commits multiple violations of Godwin's Law in what follows, not altogether inexcusably under the circumstances.]  In other words, Hitler treated Gypsies as a race himself.  He judged them as a collective, as he judged every race, and he sentenced Gypsies to be murdered en masse.

Today Europe is liberal, in some ways much more liberal than even we [i.e. Canada] are.  Throughout Europe there are literally thousands of illegal Gypsy shanty towns; and hundreds of left-wing lawyers and journalists and "human rights" activists who would stop police from enforcing basic laws of hygiene and schooling for children, let alone larger laws against crime.

A few years ago violence in France led that government to deport hundreds of Gypsies who had migrated in from Romania.  They weren't French citizens, so France just kicked them out.

Now I'm not saying that any place like Nazi Germany, not to any bad place at all, actually; just back to a fellow European Union member nation—Romania, a democracy.

Here was the response from the EU's Commissioner for Justice, Fundamental Rights and Citizenship.  Her name is Viviane Reding, and I'm going to quote.

She said: "I personally have been appalled by a situation which gave the impression that people are being removed from a Member State of the European Union just because they belong to a certain ethnic minority.  This is a situation I thought Europe would not have to witness again after the Second World War."

Really?  So France kicking out some criminal non-citizens—based on their crimes, not on their race [Eh?  Few to none of them had been convicted of crimes]—is now morally equivalent to Nazi Germany?

Now France obviously was outraged by this slur and suggested that Reding's own home country, Luxembourg, take in all the Gypsies it likes.  Yeah, funny about that, they declined to.  [With their per capita GDP over $80K, exceeded only by Qatar and Liechtenstein, I doubt the Luxembourgeois would take me . . . but hey.]

Well, no-one in Europe wants Gypsies; so maybe Canada is an easy mark?

Forget "maybe"—of course we are.  We're not used to Gypsies.  We don't have our guard up.  We keep thinking of Cher and that song and how sexy Gypsies might be.  We forget about their thieving . . . Oh, and our generous welfare and healthcare system.

So get this:  Gypsies started flying to Canada and applying for refugee status:  "refugees" as in "people who are afraid of being persecuted back home, in democratic, liberal Hungary, where there are a lot of Gypsies"?

No, they're not refugees.  They're child-abusing crime gangs seeking out new turf!

Look at this.  In 2007, for example, fully a quarter of all the world's Gypsy refugee claimants from Hungary applied to Canada.  They managed to game the system, to figure out how to stay here, how to melt into the background and disappear.

So word got around and by 2011 literally 97.8 percent of all the world's refugee claims made from Gypsies in Hungary came to Canada!  97.8 percent!

Now let me remind you, Hungary is a great place to live.  It's free, it's rich, it's a democracy.  But literally thousands—5,146 to be exact—5.146 Gypsies have decided to claim they're refugees so they can come and set up camp here in Canada.

They just sneak away.  It was just a sneak past the customs and border guards at the airport that they made this bogus claim.

Of the rest, the ones who do apply for refugee status to go through the process, the vast majority are rejected.  Of course they are!  Sorry: Being a child abuser or a criminal hassled by cops, is just not the same as being a refugee.

So only five percent of all these thousands of claims are accepted as legitimate.  Shocker:  Gypsies are gypping us.

That isn't a racial statement; it's a statement about immigration fraud, let alone the other crimes committed by Gypsies here.

According to Immigration Canada, each of these claims costs taxpayers fifty thousand dollars.  So that's a quarter of a billion tax dollars wasted on this scam in 2011 alone.  Add in the actual crime committed by these scammers, and you're surely over a billion dollars a year cost to Canadians.

Yeah, the Gypsies are here.  And no, they look a lot more like biker gangs and child predators, and a lot less like Cher.

Setting aside Ezra Levant's Blank Slatist tendencies, his confusions about race and discrimination, his multiple violations of Godwin's Law, and his unaccountable (to my taste) belief that Cher could put over anything romantic, this is a pretty good rant.