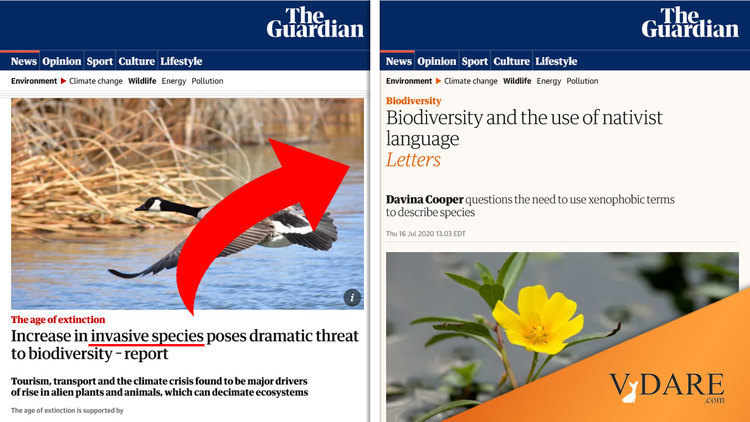 From The Guardian news section:

Tourism, transport and the climate crisis found to be major drivers of rise in alien plants and animals, which can decimate ecosystems

Canada geese are now well-established in Europe, posing a threat to biodiversity.

From the Letters to the Editor column in The Guardian two days later:

Biodiversity and the use of nativist language

Davina Cooper questions the need to use xenophobic terms to describe species
July 16, 2020

The widely used language of alien and invasive species threatening native ones (“Increase in invasive species poses dramatic threat to biodiversity – report,” 15 July) is disturbing, even when it’s about plants. There is a long-running debate in biology about the nativist and xenophobic resonances, and racist and antisemitic histories, surrounding claims that foreign plants and wildlife invade, take over and wipe out domestic species, upsetting the “natural” balance.

Racism works through commonsense meanings and ideas, and these don’t have to be about people. Clearly, some plants and animals cause harm or create change, including by impeding biodiversity. But surely there is a public language to talk about these problems away from the pervasive terms of native and alien, with its dangerous implication that certain things belong, have always been at home here and form part of a proper (even timeless) balance, which the incomer upsets.