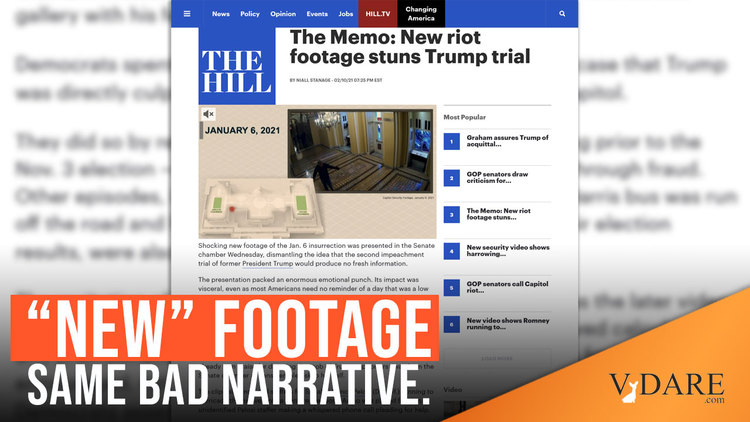 See, earlier: CAPITOL "INSURRECTION" HOAX: How Our Lying Press Would Have Spun Jan 6 Protest If Trump Were A Democrat [VIDEO]

In the first two days of the Senate impeachment trial of Donald Trump you've probably been bombarded with news headlines claiming the release of "new footage" of the January 6th event at Capitol Hill. They call the footage "harrowing," "stunning" and even warn families and teachers to shield their children's eyes before playing the clips. I imagine Senate Democrats worry young white boys in civics class may find the footage stirring after sitting through years of dogmatic programming in the public education system. [The Memo: New riot footage stuns Trump trial, The Hill, February 10, 2021]

The footage is not actually new. Democrats have simply repackaged old livestream footage and YouTube clips and manicured it to promote their narrative that Trump deliberately sent a mob of protestors to kill Mike Pence, which is obviously a lie. Trump never advocated violence in his speech before his supporters descended on the Capitol.

He specifically told them to march peacefully and "cheer on" Republicans who were slated to contest the certification of the election. If anyone is culpable for the violence that took place on January 6th it should be provocateurs and individuals in the crowd who made the choice to do so—not Trump, and not the majority of peaceful protestors who stood outside in a crowd of thousands unaware of what was happening in the Capitol building.

Furthermore, why wasn't a special committee set up during the BLM/Antifa summer of rioting in 2020? Then-candidate, now VP-Elect Kamala Harris promoted a bail fund for Leftist protestors caught setting fires and attacking police officers. Why is Donald Trump, a private citizen, facing impeachment and not her?