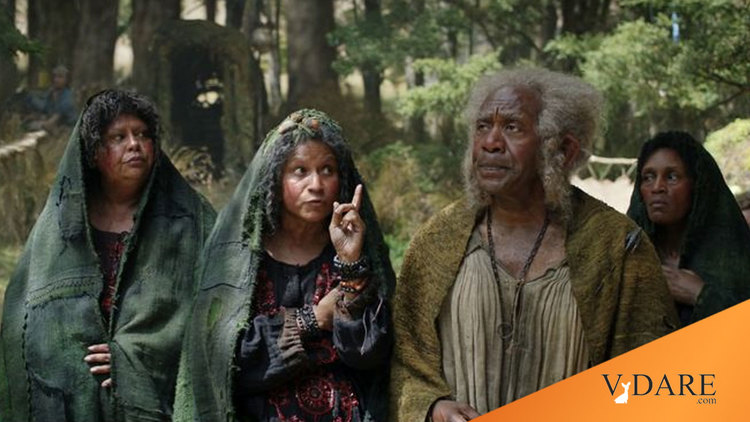 Lord of the Rings: The Rings of Power is nothing more than The Great Replacement come to Middle Earth. And almost 99% of Tolkien fans are putting in their special edition DVDs of the extended versions of Fellowship of the Ring, The Two Towers, and Return of the King to remember what intoxicating whiteness does for the soul.

Cleansing away the poison of wokeness…

‘The Rings of Power’ Star Lenny Henry Implies Critics Of Amazon’s Race-Swapping Are Racist: “They Have No Trouble Believing In A Dragon But Can’t Accept That A Black Person Could Be A Hobbit Or An Elf,” by Spencer Baculi, Bounding Into Comics, September 2, 2022

Like so many before him who have defaulted to the same tired excuse in order to defend any number of live-action Hollywood adaptations from criticisms against a given project’s bastardization of its source material, series star Lenny Henry has dismissed critics of The Lord of the Rings: The Rings of Powers’ race-swapping of J.R.R. Tolkiens [sic] original creations as nothing more than racists who can’t handle the idea that “a Black person could be a member of the court, or a hobbit, or an elf.”

The comedian, who portrays the ‘non-HobbitHobbit‘ Sadoc Burrows in Amazon’s multi-million-dollar swing-and-a-miss, offered his thoughts on critics of the series’ changes to Tolkien’s dutifully and explicitly crafted world during a recent interview given to GQ.

Prompted to address the subject by GQ associate digital editor Ben Allen’s inquiry of, “What made you want to get involved in The Rings of Power?”, Henry bluntly began, “I love fantasy.”

“I’ve been reading comics since I was nine,” he recalled. “Tolkien was from Birmingham, and the Shire is based on the Lickey hills in Birmingham. It all very much feels like something to me.”

However, despite feeling this connection to The Lord of the Rings, Henry then noted that “Often when you’re watching these things, you don’t see yourself as a Black person. But what’s interesting about this being told from a 21st-century perspective, things are being reconfigured. And I liked that.”

“[I agreed to be in the show] because maybe some kid will be watching this one day and they’ll see [co-stars] Ismael Cruz Cordova and Sophie Nomvete and they’ll see me and go, ‘Yeah, I can wield a sword. Yeah, I can rock a bow and arrow’,” the actor explained. “This is a groundbreaking moment.”

Met in turn with the assertion from Allen that “it feels like the big new fantasy franchises are finally diversifying” – a presumed reference to the similar race-swappings seen in such series as HBO’s House of the Dragon and Netflix’s The Witcher – Henry affirmed, “There’s a real sense of trying to be more inclusive than we were in this world” before turning to address those who disagreed with the pair’s belief that this post-2014 screenwriting trope was anything but trite and lazy.

It’s not about making great art. It’s about replacing whiteness to these cretins.

Just laugh at them, because the more brazen the anti-whiteness becomes, the more and more white people embrace intoxicating whiteness.

We don’t want the past. We want the promise of what our ancestors dared bequeath their posterity.