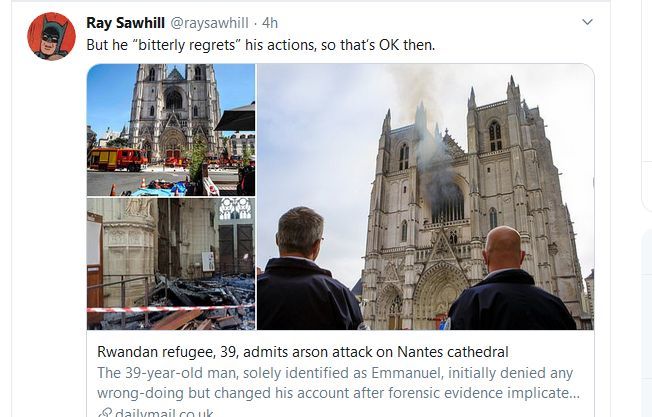 Rwandan refugee, 39, faces up to 10 years in prison after admitting arson attack on Nantes cathedral
By Peter Allen and Lydia Catling For Mailonline
06:50 26 Jul 2020,

A Rwandan refugee could face up to 10 years in prison after admitting setting fire to Nantes cathedral.

He’d been arrested before, denied his crime, and was let go. But now they had more forensic evidence, so when arrested a second time, he broke down and confessed.

The 39-year-old man, who has solely been identified by his first name Emmanuel, worked as a volunteer security guard at the 15th-century Cathedral of Saint Peter and Saint Paint which set alight last week. …

Emmanuel was being housed by the Nantes diocese, having arrived in France five years ago, and was one of seven security guards at the cathedral.

Meanwhile, in the arson investigation of the fire that gutted the San Gabriel Mission, one of the oldest buildings in Southern California, the police have arrested a suspect. They first arrested him for another fire-starting incident and now he think he also did the big one too. His identity has not been released.

Whether these best known of the glut of church-burnings recently were ideologically motivated or were merely the work of the usual nuts, perhaps excited by the media-endorsed craziness of 2020, is unknown.