Grace & Steel Podcast: Orlando and the Battle for the West; London, 1976: My Punk Rock Summer; etc.

Episode 42 of my podcast is now posted here (with copious links). In Part 1, we discuss the Orlando massacre and the plague of intersectionality. Diversity has given us a world where the commonweal has disappeared. Instead, there are innumerable minority groups mewling, “What about us and our pain?”

Conspicuous in this regard was the LGBTQAEIOU+SometimesY brigade. Owen Jones, who has replaced the disgraced Johann Hari as Britain’s ubiquitous leftist media twink, flounced off the set of an interview because the interviewer refused to regard the Orlando dead as gay martyrs. In his view, their status as Latinos and Americans was surplus to requirements. Elsewhere, gay activists employed the Orlando dead as cudgels in their battle to force authorities to allow homosexuals to once again donate blood. It’s as if the 1980s never happened.

The Orlando narrative threatened to go off the rails when it was revealed that the killer, Omar Mateen, was himself a conflicted homosexual. The FBI then poured cold water on this revelation, leaving everyone thoroughly confused and leading some observers, including the present writer, to conclude with Claud Cockburn (and others), “Believe nothing until it has been officially denied.”

World leaders issued the usual pro forma declarations of solidarity with the victims and spoke of the need to combat a threat they could not bring themselves to mention by name: “radical Islam.” Donald Trump, as always, was the exception:

If we do not get tough and smart real fast, we are not going to have a country anymore. Because our leaders are weak, I said this was going to happen—and it is only going to get worse. I am trying to save lives and prevent the next terrorist attack. We can't afford to be politically correct anymore.

Trump is now in the unlikely position (for a Republican presidential nominee) of being the champion of the gays against those who would kill them and against those who refuse to specify who those killers are. The Donald was mocked and pilloried for his cautionary stance on Muslim immigration, but this has been vindicated, with a majority of Americans now agreeing with a temporary ban on all Muslims entering the United States.

We then engage in some special pleading. Even as the number of my Twitter followers continues to grow (now +2,500) and my 28-day total of “impressions” (page views) tops 800,000, it appears that Twitter is not best pleased with what I have to say. I have now four times been subjected to what has been called the “shadowban.” As the name suggests, this is not an outright ban; instead, the social-media company refuses, with no explanation, to send your tweets to your followers. As a commenter at Vox Day’s site pointed out:

The only value in these companies is their user base. Driving away users because of politics is like UPS announcing they don't want to carry packages from people with red hair. And because of network effects, the more users they alienate, the stronger the competition will become. 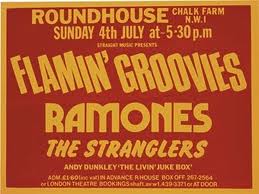 In Part 2, we engage in some nostalgia for 1976. “Bliss was it in that dawn to be alive, but to be young was very heaven!” Or so it seemed to me, who spent a month in London that year, wilting in the heat of the hottest summer of the century and getting to know about punk rock at first hand. I saw the Sex Pistols (and the Damned) twice at the legendary 100 Club and was present at the equally legendary July 4, 1976, concert at the Roundhouse with the Flamin’ Groovies, Ramones and the Stranglers.

I met one of my heroes, the New Musical Express journalist Nick Kent, and a singer-songwriter who was to become one, the wonderful Nick Lowe. I had a short conversation with Johnny Rotten:

I also visited Paris and won an unexpected and delightful victory over the French bureaucracy, but to learn how a group of American schoolteachers saved my bacon, you’ll have to listen in.