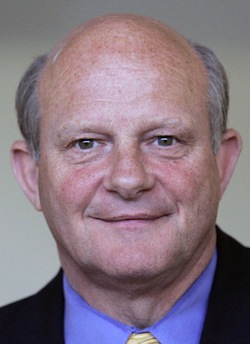 You can add Sheriff Terry Johnson (pictured) of Alamance County North Carolina to the list of public officials who have been prosecuted for performing their jobs — most recently Texas Governor Rick Perry who was indicted for lawfully vetoing a budget item. Another victim of the liberal war against law enforcement is Arizona Sheriff Joe Arpaio, who was found guilty of racial profiling in 2013.

Sheriff Johnson is now undergoing a trial of the same profiling slam, which is a handy strategy of the DoJ since more than three-quarters of illegal aliens are brown-skinned people from Latin America. Therefore, immigration enforcement normally nets few white people, and efficient law officers protecting American sovereignty are racists by definition according to Eric Holder and his merry band of government punishment lawyers.

In 2011 I reported about Sheriff Johnson and Alamance County’s embrace of 287(g), a program of local-federal partnership in immigration enforcement (North Carolina Considers Increased Immigration Enforcement). The program was very efficient and helped Alamance deport nearly 1800 illegal aliens over the five years preceding 2011. Perhaps that level of repatriation was too productive for the current administration and is the reason for today’s prosecution.

National Public Radio covered the story on August 15, with its usual fondness toward diversity of any legality, N.C. Sheriff Terry Johnson On Trial For Racial Profiling:

However, some of the Sheriff’s constituents thought enough of the job he does to turn up at the trial in support. (You can email your own encouragement to Sheriff Johnson at: terry.johnson@alamance-nc.com.)

WINSTON-SALEM — Bill and Linda Watkins of Alamance County said Tuesday they didn’t believe Sheriff Terry Johnson and his department had targeted Latinos unlawfully, as alleged by the U.S. Justice Department in a lawsuit it filed in 2012.

The Watkinses were among Johnson’s supporters present during the first day of trial at the Hiram H. Ward Federal Building. The day’s testimony included former deputies’ accounts of a checkpoint set up about a half-mile from where the Watkinses live on N.C. 49. They said whenever they see a checkpoint, it makes them feel safer because it shows them that law enforcement agencies are fighting crime.

Linda Watkins plans to attend almost every day of the trial, which is expected to last 10 days. She doesn’t believe Johnson treats people differently based on their race. After the first court recess, she shared her opinions regarding some of the testimony she had heard.

“What stands out to me is that it seems the previous deputies have an ax to grind,” she said.

Sammy Moser of Burlington was also among Johnson’s supporters in the courtroom Tuesday. Moser said he preferred to see the DOJ support local law enforcement instead of filing lawsuits against Johnson, and he believed arguments made during the first day of trial by the DOJ against Johnson were “very vague.”

N.C. Immigrant Rights Project Executive Director and Attorney Martin Rosenbluth represents at least three witnesses that may be called to the stand. He recently moved his office from Durham to Burlington. Rosenbluth said it was alarming for him to hear testimony from former deputies that booking procedures at the jail changed after the sheriff’s department implemented the 287(g) program in 2007. Rosenbluth also said he believed evidence at the trial will expose how Latinos have been unlawfully targeted, and that he hoped Latinos can get justice from the court proceedings as they unfold.

Fairness Alamance member Ben Ansbacher also was in attendance Tuesday. He declined to comment about the case. Fairness Alamance is a local immigrant rights group that has supported the DOJ’s case against Johnson and his department.

The United States vs. Terry Johnson isn’t the most high profile police discrimination case the DOJ has pursued in recent years, but it’s one of the few that has gone to trial. According to the DOJ’s Civil Rights Division, from 2009 to 2012, it opened 15 policing investigations, issued eight letters of misconduct, and reached 10 agreements for comprehensive reform of police departments.

According to the DOJ, the Civil Rights Division entered into court-enforceable agreements with six jurisdictions in 2012 to address serious policing challenges, the most agreements reached in a single year.

On June 17, the DOJ and attorneys representing Johnson failed to reach a settlement agreement during a mediation conference in Durham. Settlement conferences are standard procedure before a case goes to trial.