Broken Ship with 700 Middle Easterners Is Towed to Europe

In the United States we get trainloads of illegal aliens, but in Europe the intrusive moochers often come by the shipload across the Mediterranean.

The latest influx of invasive boat people has come on a basic freighter and they number around 700 (pictured below). 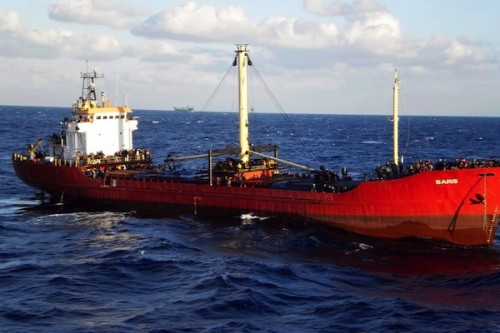 We shouldn’t think too harshly of the illegal invaders since they are responding rationally to Europe’s rescue and potential offer of a home in the first world. Elite Europeans became overly generous with governmental services after a particularly terrible loss of life when hundreds of boaters drowned in attempting to reach the continent in October 2013. The EU decided that somebody needed to rescue the Africans and Middle Easterners and that duty fell on the Italians because of geography. But a year later, Italy declared that it would end its navy’s Mediterranean rescue operations, because the policy enticed more to come.

This week’s boatload approached from the east (Turkey) rather than the southern route starting in north Africa. Perhaps the boaters hope the Greeks will be more hospitable than the Italians — at least for the time being.

The NPR story below includes an audio version at the link.

Disabled Ship With Hundreds Of Migrants Aboard Towed To Crete, NPR, November 27, 2014

RENEE MONTAGNE, HOST: It is worth considering on this day the millions of people around the world who are refugees fleeing war. Many trying to escape the fighting in Syria, Afghanistan and Iraq try to reach Europe. About 700 refugees are on a broken-down freighter in the Mediterranean Sea right now under tow by the Greek Coast Guard. Joanna Kakissis has the story from Athens.

JOANNA KAKISSIS, BYLINE: The Greek Coast Guard says the 250-foot cargo ship was headed to Italy when its engine failed. Hundreds of migrants, including women and children, are on board. The Greek Navy towed the ship through rough waters to the port of Ierapetra in southern Crete. The mayor of Ierapetra, Theodosios Kalantzakis, says local authorities and aid workers have turned an indoor basketball court into a shelter.

KAKISSIS: This space can’t house them for long, Kalantzakis says, but we had to put them somewhere until they go to migrant detention centers. Most of those on the ship are refugees from Syria and Afghanistan, he says. Amnesty International says that more than 2,500 people have died this year trying to cross the Mediterranean Sea to make it to Europe. The number of undocumented migrants arriving in Greece has tripled this year, says merchant Marine Minister Miltiades Varvitsiotis.

MILTIADES VARVITSIOTIS: We estimate that in 2014, we are going to receive more than 30,000 illegal immigrants.

KAKISSIS: Most refugees from Syria and Afghanistan enter Turkey by land and then travel by sea to Greece and to Greek islands, such as Chios, where harbormaster Ylannis Argyrakis has his staff on patrol 24 hours a day.

KAKISSIS: Some come by speedboats, and Turkish smugglers leave them on a beach, Argyrakis says. Others travel on their own on small, inflatable boats. And no matter how bad the weather is, he says, they still want to cross. For NPR News, I’m Joanna Kakissis in Athens.