Gordon Tullock On Chexit: China Might Simply Break Up

In Chexit: Is CHINA Exempt From Disintegrating Into Component Nations?, I pointed to a recent Peter Lee article about China on Unz.org about the possibility of China breaking up, titled What if It Wasn’t “One China” vs. “Two Chinas”? What If There Was “No China”?

Here's an earlier source, from an interview VDARE.com Editor Peter Brimelow conducted with the great economist Gordon Tullock in Forbes, September 22, 1997.  In addition to his economic work (he ought to have won a Nobel Prize twice ) Tullock was an "Old China Hand" who witnessed the betrayal of Chiang Kai-Shek by pro-Communist State Department employees in the 1940's.

Here he is on the subject of a possible break-up:

Why did China, long the world's most advanced civilization, stagnate?

Gordon Tullock's answers are typically offbeat. "You hear about these dynasties in China that last three or four centuries," he says. "But the overwhelming majority lasted only around 50 years. The prospect is that that will turn out to be the case here."

Tullock gives equal odds to three scenarios for China. "Economic growth and liberalization may continue—that's not impossible," he says. "But it is quite out of the Chinese tradition. Mencius [Confucius' principal disciple, 3rd century B.C.] said the government should own the principal industries and closely control the rest. Even now, the big companies are still government run. It [the government] apparently doesn't dare get rid of them."

Tullock's second alternative: "It's also possible that the government itself may abandon the move to free enterprise," he says. "China may come under the control of a set of old-fashioned Communists who clamp down the roof and stagnate." China has regressed like this before, Tullock notes: The Ming Dynasty (1368-1644) turned away from commerce and paper money.

Tullock's third and most startling scenario: China might simply break up. "The area has had a more or less homogenous culture for about 2,000 years and a strong central government during maybe 1,500 of them," he says. "But it has broken up from time to time. The most recent case was in 1911. From 1911 to 1949 there was never any real central government in China." (See maps.) 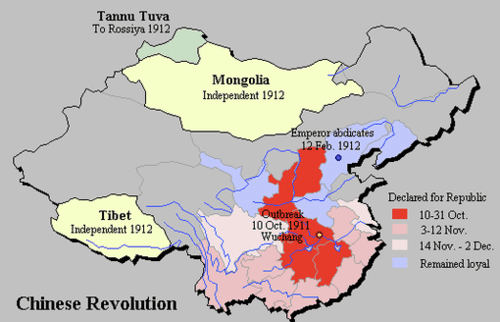 Historic China, homeland of the Han Chinese, is only about half the area of the current People's Republic, Tullock points out. Outlying areas like Manchuria, Inner Mongolia, Xinjiang and Tibet were added by imperial conquest. Their ethnic minority populations have a long history of periodic revolt. Even Taiwan, now the base of the Nationalist Republic of China, was seized by the Chinese only in 1662, decades after the Pilgrims arrived in Massachusetts.

Which could matter—at a time when the level of economic development in China's southern coastal provinces is rapidly diverging from that of the interior.

Most American China-watchers don't see a breakup on their radar screen. But Tullock is used to being in a minority.

"When I got to China [in 1948]," he says, "there were only two officials in the U.S. consulate who were not pro-Communist, myself and the commercial attaché. Everyone—not just State Department officials, but missionaries, businessmen—was so antagonistic to the Nationalists that they more or less thought anyone would be better." This expatriate antagonism, he believes, stemmed from a fundamental naiveté about Asia's different, sometimes distressing, moral code.