The Battle Of The Somme At 100: "Gentlemen, When The Barrage Lifts"

Today — July 1st 2016 — is the centenary of the bloodiest day in British military history, the first day of the Battle of the Somme in World War I. The Brits suffered almost 60,000 casualties in that one day, with the usual meaning of "casualties": killed, wounded, and missing. The number actually killed was close to twenty thousand — again, in just that one day — for essentially 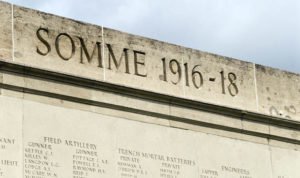 no gains. The battle continued for a further four months.

Here is a reading from Paul Fussell's 1975 book The Great War and Modern Memory. The Times and Telegraph he refers to are London daily broadsheet newspapers, both still in business, though I don't know if these notices still appear. You also need to know that before attackers climbed out of their trenches to assault the enemy lines, artillery back in the rear tried to "soften up" those 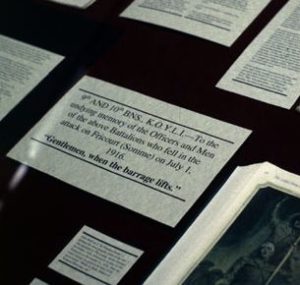 lines with a massive barrage of shells to destroy fortifications and demoralize the enemy.

Every day still the Times and the Telegraph print the little "In Memoriam" notices — "Sadly missed," "Always in our thoughts," "Never forgotten," "We do miss you so, Bunny" — the military ones dignified by separation from the civilian. There are more on July 1 than on other days, and on that date there is always a traditional one: B.H. Liddell Hart, who was in the 9th Battalion of the King's Own Yorkshire Light Infantry, explains. Just before the Somme attack,

the officers assembled in the headquarters mess, in a typical Picardy farmhouse. Recent strain between the commanding officer and some of the others led to an embarrassing pause when the senior company commander was called on to propose a toast to the C.O. On a sudden inspiration, he raised his glass and gave the toast with the words: "Gentlemen, when the barrage lifts."

The battalion attacked with some 800 men. Twenty-four hours later its strength was 80 men and four officers.