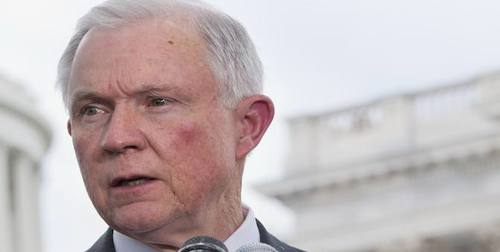 Senator Jeff Sessions was the ranking Republican on the powerful Senate Budget Committee when the GOP was in the minority. Now that the GOP has taken back the Senate, largely as a result of the immigration issue for which Sessions is the most reliable spokesman, Sessions should become Chairman of the Budget Committee. But Mike Enzi of Wyoming is trying to grab the chairmanship:

Conservatives Get Snubbed On Committees

Squeezing out conservatives on committee assignments is a tried and true strategy of the establishment. Boehner has threatened and successfully kicked conservative “troublemakers” off of committees for standing up for their principles. In the Senate McConnell even had to recruit Senator Richard Burr (R-NC) for the Senate Finance Committee to jam then Senator DeMint. Even recently, conservative Rep. Jim Jordan (R-OH) was pushed out of the chair at House Oversight because he wanted to aggressively go after the Obama administration.

It is happening again. Conservative Review was the first conservative media outlet to detail how Senator Enzi was challenging Senator Sessions for the Budget gavel and then laid out how McConnell has the ability to stop or sway the contest.

Seniority plays a large role in Senators’ committee assignments and is traditionally used by the establishment as the reason for withholding key positions from conservatives. However, in the case with Senator Sessions (R-AL) he is the more senior (and more conservative) member.

Senators Enzi and Sessions were both elected in 1997, but because Alabama is a bigger state than Wyoming, Sessions is a notch above Enzi on the seniority ladder. However, for committee assignment purposes tiebreakers on seniority are done by lottery, literally luck of the draw.[More]

Mike Enzi has nominally the same 100% rating on immigration that Sessions does, but when Liz Cheney tried to primary him, Washington Watcher wrote this:

Thinking about the Enzi-Cheney primary in Wyoming: Senator Mike Enzi is not an enemy of patriotic immigration reform, but he is hardly a champion. His recent A+ is based solely on votes against cloture and final passage of the Gang of Eight immigration bill. I’m glad he did this, but it does not make him a hero.

Anyone who voted against the cloture and final passage of the bill and did not vote for any bad amendments or sponsor any other bad legislation will get an A+ from Numbers USA. Prior to Enzi’s votes against this latest amnesty, he had a B-.

Enzi is not bad on immigration, and has consistently voted against every single amnesty that came to the Senate in the last decade. However, he has never done anything proactive. In fact the only bills on immigration he has co-sponsored were to increase H-2B visas and AgJOBS. He’s better than your average Senate Republican, but he has not showed any leadership on this issue.

I would reserve the term “immigration patriot” for people like Jeff Sessions and David Vitter who consistently have stood up against amnesty and mass immigration.

James Antle has an analysis at The Week. After explaining the takeover attempt, he explains why it matters.

Brat spoke out against direct corporate welfare, but also characterized amnesty and loosey-goosey immigration policy as an example of the incestuous relationship between big business and big government.

If Enzi replaces Sessions as Budget Committee chairman, it won't stop the Alabaman from pushing his immigration message. After all, Tom Tancredo didn't need a committee chairmanship and he was only in the House.

But losing the Budget gavel would deprive Sessions of a significant platform. And it would send an unmistakable message if Senate Republicans were to pass over one of the party's most effective immigration skeptics.

Considering that the last Republican-controlled Senate passed a comprehensive immigration reform bill in 2006, this ought to give anti-amnesty conservatives something else to be angry about.

Behind the latest GOP proxy war over immigration |The campaign to deny Jeff Sessions the chairmanship of the Senate Budget Committee reveals a schism within the party By W. James Antle III, December 1, 2014.