College fraternities are public enemy number one on college campuses, targeted for destruction by both the administration and the Social Justice Warriors. And now, the most triggering combination possible has arisen. The Trump Bros have come.

Young men like Rowe are a common sight at Trump rallies around the country: Mostly white, they travel in packs and frequently wear Trump's signature "Make America Great Again" hats, pumping their fists and cheering loudly as protesters get hauled out by security. They document their political activity like any good millennial would, recording their outings on Snapchat, Instagram and Twitter.

They are dudes, jocks, preps and just-your-average college and high school kids. But on the campaign trail, they've come to be known simply as "Trump Bros."

"Bro," once just shorthand for "brother," is a term that today describes a white youth subculture of "fratty masculinity," as National Public Radio once politely put it. Depending on your perspective, "Bro" can either be meant as high praise (usually from a fellow khaki-wearing bro), or a derisive insult.

In dozens of interviews conducted around the country in recent months, one thing is clear: Many of them absolutely love the GOP frontrunner.

Naturally, the Left is torn between fury and disbelief over all this.

Many of us still expect to wake up one morning to the announcement that Trump and several million people on a secret Republican email list dreamed this up as a nationwide prank. Hasn't happened yet, but it still could.

Nobody really talks like this unless they're pranking us, right?

The Left is missing two things here. First, there is obviously an element of self-awareness when it comes to Trump Bros. It's a little ridiculous, but so is some of Trump's rhetoric. But both Trump and his supporters are in on the joke. They're laughing about things which the mainstream media demands we take seriously, especially political correctness. And secondly, as I've written before, Trump's name is a killing word against PC. He's a rallying cry for those sick of the SJW nonsense on campus.

Thus, the battle on campus is rapidly becoming a battle over Trump. Not long ago, Twitter erupted because reportedly over 100 campuses had people writing pro-Trump slogans on the sidewalk, an event dubbed #TheChalkening. 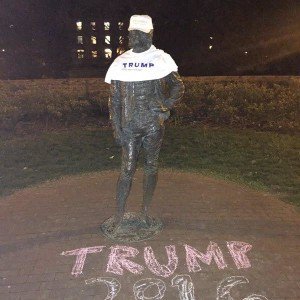 And a fraternity even built a Trump wall out of sandbags in front of its house, though outraged minority students tore it down. The story is still developing, but I expect they will receive no punishment.

PC is the Establishment on campus and "Trump Bros" are the rebels trying to tear down a despicable and cowardly system. Trump has given them their rallying cry. It's about time they had one.