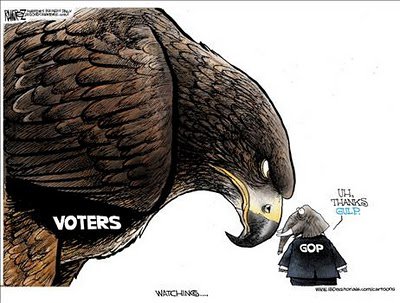 Yesterday’s letter A Talk Radio Listener Says That Rubio Is A Head Fake; Ryan Is The GOP’s Real Plan B speculated about what the GOP Establishment might be plotting in the event Trump goes to the Convention without an outright majority.

As I noted last year in AdelZuck Servants Move To Exclude Serfs And Their Issues From GOP Presidential Selection Process a great deal of devious scheming has gone into preventing the Republicans responding to their base and emerging as the Generic American Party.

This is gleefully and thoroughly laid out at fivethirtyeight.com: The GOP’s Primary Rules Might Doom Carson, Cruz And Trump By David Wasserman Nov 4, 2015. Representative atrocities -

• According to the RNC’s allotment rules, three delegates are at stake in each district, regardless of the partisan lopsidedness of the seat… For example, three delegates are up for grabs in New York’s heavily Latino, Bronx-based 15th District, which cast just 5,315 votes for Romney in 2012. But there are also three delegates at stake in Alabama’s 6th District, which covers Birmingham’s whitest suburbs and gave Romney 233,803 votes. In other words, a GOP primary vote cast in the bluest part of the Bronx could be worth 43 times more than a vote cast in the reddest part of Alabama.

• ...despite both states having nine congressional districts, Tennessee will send 58 delegates to the Cleveland convention while Massachusetts will send 42. But the bigger boon to Rubio, Bush and other moderates is that the opinions of GOP voters in places like Massachusetts count at all in this process — in an era when the Bay State sends zero Republicans to Congress.

In a word, the GOP Primary process has been rigged to prevent the South and interior West exerting their rightful influence. This reflects the extraordinary aversion the DC crowd has to their key supporters.

But Wasserman has to admit a 2015 reality so unpleasant he slyly demotes it to a footnote:

Trump’s case is a bit unique. On many issues, such as immigration, Trump is clearly positioning himself to the more conservative side of candidates like Rubio and Bush. But at the moment, Trump’s support is relatively evenly distributed among moderate, somewhat conservative and very conservative Republicans. So it’s not clear Trump will necessarily do worse in blue states and districts than in more conservative ones.

Trump’s unpolished New York affect is not a positive with the GOP core – but it will help him with the peculiar Blue State bias Conservatism Inc built into the system. They never expected an insurgent with Northern strength.

Once again, Trump is the Indispensible Man.