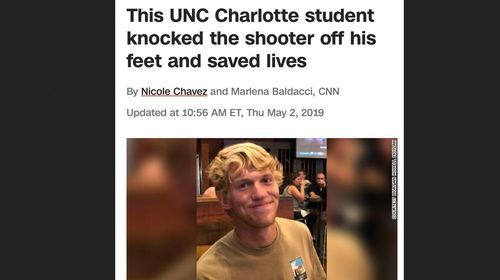 Glory At UNC Charlotte: Student Who Died Fighting Back Against Mass Shooter To Be Buried With Full Military Honors

At Radio Derb I have fun with the follies and blunders of our public life. There is so much stupidity, so much hypocrisy that cries out to heaven to be mocked, lampooned, and insulted.

There's serious stuff out there too, though, of course: events to which irreverence is not appropriate, to which the proper responses are grave, solemn, humble, and respectful. In that spirit, if you will allow me, I offer up a brief memorial to a brave young American.

Tuesday afternoon there was a shooting at the University of North Carolina in Charlotte. Twenty-two-year-old Trystan Terrell, a young white man with no obvious mental abnormalities and no motive anyone can figure, walked into a classroom at the university and opened fire on the students with a licensed handgun. Two people were killed and four were wounded.

One of the two killed was 21-year-old Riley Howell of Waynesville. Mr Howell had charged at the gunman, knocking him off his feet but taking a fatal bullet in the process. That was a brave, a heroic thing to do.

Every time there is one of these incidents where a lunatic starts shooting at people, I go through the same mental gyrations. One voice in my head says: "Why didn't someone charge the guy? You're going to get shot anyway, so what the heck." Then the other voice in my head replies: "Hey, Derb: Would you charge a guy with a gun pointed at you? Really? As opposed to just ducking behind the nearest piece of furniture?"

And of course I'm not at all sure I would. You can't know until the stuff happens. I hope I would; but my best guess, to be perfectly honest, looking back at my reactions to some moments of sudden violence in my life, my best guess is that I wouldn't. But, dammit, I still hope I would. Every man hopes so, doesn't he?

And Riley Howell did. For that, his name should live in honor and glory.

On the Remembrance Day service at my school we would all stand facing the memorial tablet with names of those alumni who had died in the World Wars, and hear the reading from the Gospel of John: "Greater love hath no man than this, that a man lay down his life for his friends."

In our safe, peaceful lives we fall into thinking that sentiments like those apply only in wartime. In fact, as what happened at Charlotte on Tuesday shows, that call to sacrifice can come to anyone at any time.

All honor, all glory, all praise to Riley Howell! Heartfelt condolences to his loved ones.

The 21-year-old University of North Carolina Charlotte student who died trying to stop a gunman on campus this week will be buried with full military honors, a funeral home in his hometown told local media outlets.