When a country has too many Muslim immigrants, violence has a way of popping up. It just sorta happens somehow. Italy is learning the hard way, with one riot per month so far this year.

Dozens of angry North Africans overturned cars and smashed shop windows in an area of the city which in recent years has become one of the most multicultural pockets of Europe.

The trouble began on Saturday after a 19-year-old was killed by a group of immigrants from South America following an argument on a bus.

The North Africans, most of them Egyptian, then went on a rampage in the northeastern area of Via Padova, attacking shops and businesses owned by immigrants from Peru, Ecuador and other South American countries.

Milan's authorities said they would start checking people's documents in the city's most racially diverse neighbourhoods in order to root out illegal immigrants.

Milan's deputy mayor, Riccardo De Corato, said officials would go from building to building in areas where immigrants live. Half of the 46 immigrants picked up by police on Saturday night had been found to be in Italy illegally, he said. [Milan riots after Egyptian stabbed to death2/14/10]

Below, Muslims residing in Milan (many illegally) apparently like to overturn cars. 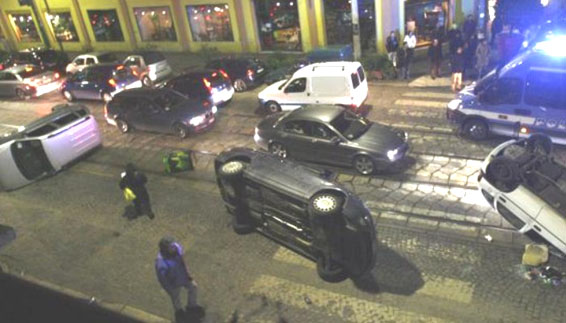