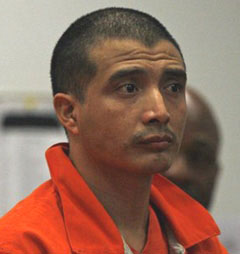 So much is wrong in this case, starting with the foreigners' misogynous culture, in which forced sex with an 11-year-old child is considered normal rather than reprehensible. The perp is a Guatemalan illegal alien, Teodoro Pablo-Ramirez (pictured), who raped the girl (a relative by marriage) who later gave birth when she was 12.

The other theme was the supposed unfairness of putting the accused man through a "normal" trial, because as a Mayan Indian speaker of Mam he did not understand Spanish well enough to comprehend a translation of the proceedings — or so his lawyer said.

TAMPA, Fla. - He was 28. She was 11. Her parents said they gave consent, claiming cultural norms of the Guatemalan highlands. But in Dover, Florida, a little girl with a baby raises questions.

When deputies came, Teodoro Pablo-Ramirez understood only some of what they said, according to his lawyer. He speaks no English and little Spanish — just the Mayan tongue of Mam.

The indigenous language, understood by few interpreters, has stymied court cases across the country. One interpreting service in Washington resorted to recruiting a Mam speaker out of a jail lobby.

In Hillsborough Circuit Court, two cases, both too serious to dismiss, are stalled for lack of a Mam translator. In one, a 4-year-old Wimauma girl was raped. The details are locked inside her mother, who speaks only Mam. And last year, Pablo-Ramirez was convicted and sentenced to life in prison, before the judge granted a motion for retrial.

The court could provide only Spanish interpreters.

The good news is that this disgusting creature got hard time; the bad news is a new trial with a Mam translator ($300 per day is the rate for one).

Your tax dollars at work: defending the diversity of a pervert invader who doesn't speak the language of his home country, much less English.