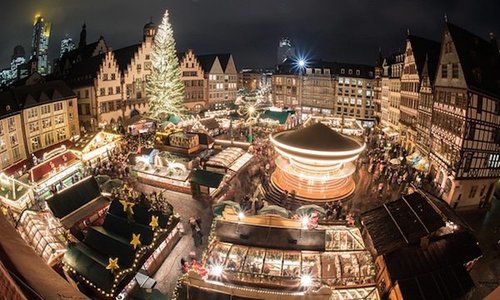 In Germany, a centuries-long tradition is the Christmas market, where people can buy holiday decorations, listen to carols, snack on seasonal foods and drink hot mulled wine. The markets often take place in historic city centers and offer an attractive reason for locals to get out of the house during the long winter nights.

But unfriendly immigration, thanks to Chancellor Merkel’s massive Muslim import project, is casting a shadow on the Christmas markets. Police presence has been increased, which has rapidly become the new normal throughout the west because of Islamic immigration and the threat the newbies pose.

Hopefully the hostiles will expend their aggressive energies on each other and leave Christmas alone.

The smell of caramelised almonds and mulled wine wafts through the air as stallholders arrange their artisanal wares at one of Berlin’s most popular Christmas markets. As the first visitors start to trickle in, it is already clear that this year things are going to be a little bit different.

Suitcases and rucksacks have been banned from Germany’s largest winter ritual and vendors have been warned to look out for anything suspicious. Plain-cloths police are said to be mingling with the crowds.

As a Bing Crosby rendition of O Come All Ye Faithful booms out from the speakers, Manfred Bauer, who is arranging his stall of around 300 brushes – from shaving sets to hedgehog-shaped shoe cleaners – says he is unperturbed by the shadow that hangs over this year’s festivities amid fears that Germany is now more vulnerable than ever to a terrorist attack.

“The danger is not greater now than it was three years ago,” he insists. “To be honest I think a lot of the fear is media-generated. I know we’ve had Madrid and London and now Paris, but I do think it’s still more dangerous to get in a car than to come to a Christmas market. The mood is good.”

But the nervousness is palpable, not least since the security forces’ dramatic lockdown two weeks ago of the northern city of Hanover.

The move followed concrete information received about a bomb attack planned at a football friendly between Germany and Holland, just days after the national team had been caught up in the drama at the Stade de France, and at the same time as army operations against terrorists were in full flow in Paris and Brussels.

Following the cancellation of the match 90 minutes before kick-off, German chancellor Angela Merkel, who had been due to attend but was forced to return to Berlin, delivered a brief statement in which she spoke of how Germany andEurope faced a “conflict between freedom and safety”.

But while the threat level in Germany remains high there is a definite sense of “before” and “after” Paris. One commentator has compared the nervous mood in Germany to that in the United States after 9/11. There is a creeping realisation that because several jihadi terrorist attacks have been foiled, the likelihood that one will succeed is high. Christmas markets – of which there are an estimated 1,500 across the country – have suddenly become potent symbols of freedom, underlining a preoccupation with the German values and way of life that many citizens feel are more under threat than at any time since the Nazi era.

“We’re not going to let what happened in Paris stop us from enjoying ourselves, this is what we’ve always done,” says Petra, a schoolteacher who declined to give her full name. She has brought a class of children from a vocational school in eastern Berlin to enjoy the festive mood.

“The Christmas market is a great chance to get together with friends and colleagues and even to fear that something might happen is a shame because it rather undermines that sense of joy,” says her colleague Sandra, as they sip mugs of deep-red hot frothy glühwein at a stall called the Heisse Hütte (Hot Hut).

The tightly packed lanes of the Christmas market are part of a tradition that goes back centuries. The Heile Welt or “idyllic world” that Germans fondly talk of is expressed in the oversized gingerbread love-heart biscuits that are for sale and the medieval half-timbered buildings reproduced as miniature ceramics. Then there are the 1920s-style felt hats and other handicrafts on display, as well as such culinary comforts as potato fritters, deep-fried sugar-coated dough balls and cherry beer. Within the confines of the market, at least, everything is as it always has been.

But while in the past organisers’ biggest worry was the presence of pickpockets, or the flaming sugar in the brandy punch becoming a fire hazard, these days the nightmare scenario is considerably darker.

Politicians have been at pains to stress that the refugee crisis that has had a radical impact on Germans’ sense of identity over the past few months has nothing to do with the terrorist attacks, but plenty of ordinary Germans talk about the two in the same breath. The fact that refugees continue to pour across Germany’s border at a rate of thousands a day with no sign of a let-up makes the country feel particularly vulnerable.

The decision in the past few days that Germany is to deploy Tornado reconnaissance jets to support the French air campaign against Islamic State in Syria and will contribute more to other military operations in the region, such as boosting its training of Kurdish forces fighting Isis militants in northern Iraq, only serves to inflate those fears that the country is increasingly exposing itself.

Arrests at a Berlin mosque last week of two suspected Islamists have added to the nervousness, even though the men were later released.

Just as at elsewhere in Germany, the authorities have considerably boosted the presence of armed police at the Christmas market in Darmstadt, in the western central state of Hesse, which opened a few days ago.

Franz Mühlbauer, a 67-year-old veteran purveyor of Bavarian herbal sweets who had set up his stall there, told the local newspaper he was unconcerned despite organisers’ warnings to keep an eye out for suspicious objects such as abandoned suitcases or empty buggies. “Darmstadt isn’t really on the terrorists’ radar, I think,” he said.

The recent hacking by al-Qaida sympathisers of the Christmas market website of the nearby town of Friedrichsdorf has made many think otherwise. Calling themselves the “Mujahideen Cyber Army”, the group warned: “Tell to your government … Don’t touch Muslims and mujahideen in Syria.”

Opening Frankfurt’s Christmas market, the city’s mayor, Peter Feldmann, struck a particular chord with the crowds. “Despite the recent disturbing pictures that have greatly affected us,” he boomed defiantly, “and despite people who want to impose their terror on us, we will not let them!”

It was clearly just what the hundreds gathered there, including a rotund Father Christmas, wanted to hear. They responded with loud whoops of approval even before he had flicked the switch to activate the 5,000 lights on the city’s towering Christmas tree.