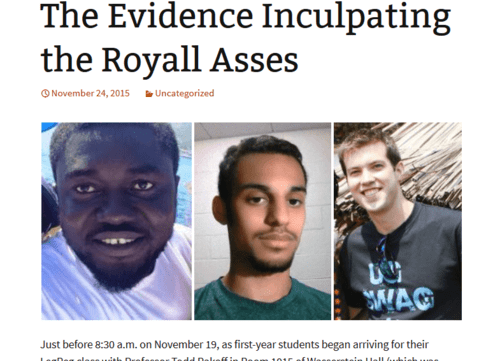 Last week’s Racist Hate Crime Crisis of the Century — some of the tape black protestors put over the Harvard Law School seal was also found over portraits of black professors — always sounded like an exceptionally lazy hoax. Couldn’t the black activists have bothered to bring a second, different roll of tape for the hoax part of their vandalism protest?

Some other HLS students have posted an analysis of the incident

5. Statements by campus security officer. A main reason we created this blog, convinced that the incident was a hoax, not a “hate crime,” was that one of our friends was in the crowd of students in the hallway about an hour after the black tape was discovered, and overheard a campus security officer reassuring a Harvard employee, who was visibly alarmed at the incident, that this wasn’t a racist incident.

It was black students who had put black tape over the faces of black professors, the security official explained, “to mark them as traitors,” because they “won’t stand with them in protests” — exactly what the black students did last year, during the Ferguson protests.

The contemporaneous conclusion of campus security officials that this was an obvious hoax, and not any sort of “hate crime,” has not yet been reported in the media.

6. Statement by Professor Randall Kennedy. Our confidence that this was, in fact, a hoax was strengthened later that day when we learned of the reaction of Prof. Randall Kennedy (one of the black professors whose portrait was covered with black tape). In a class a few hours after the incident, Prof. Kennedy reportedly said he didn’t know what the black tape meant. He reportedly speculated that the black tape could have been placed by someone seeking to “chastise” black professors for not being outspoken enough on racial issues on campus.

Crediting this report (of which we have only third-hand knowledge), why would this possibility immediately come to mind for Prof. Kennedy? Presumably because, as the security official stated, black students tried this stunt last year, in a selective protest against only certain black professors — but last year, unlike on November 19, the tape was discovered and removed before any students saw it, so that only the professors and administrators (and the hoaxers, who could hardly complain about their hoax being foiled) ever learned about the incident.

Sure, slack planning of hoaxes is to be expected at, say, Oberlin, but this is Harvard Law School. The public expects scams perpetrated by people associated with HLS to show attention to detail. This example undermine public confidence that an HLS diploma guarantees at least a minimum level of cunning. Are you going to trust HLS alumni to plot your $100 billion tax inversion merger grift if HLS students can’t pull off a simple hate hoax?

But, paradoxically, the incompetence of the incident only motivates Harvard authorities to take it more seriously. From the Harvard Crimson today:

On the heels of an incident of racially-charged vandalism on campus, Harvard Law School Dean Martha L. Minow has appointed a committee to reconsider the school’s controversial seal—the crest of the former slaveholding Royall family that endowed Harvard’s first law professorship in the 19th century.

But think about it from the perspective of Dean Minow. What’s the alternative? To not take it seriously would to to imply that Harvard Law School blacks tend to be transparent screw-ups who can’t carry out a simple racial hate hoax without embarrassing themselves.