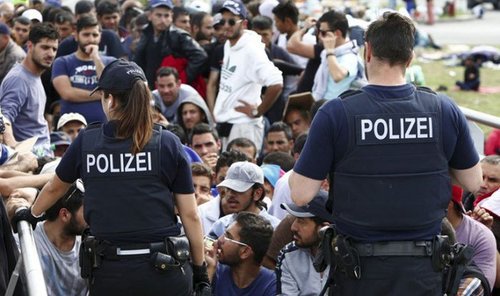 The Huffington Post has published a devastating interview with a Syrian in Germany, demonstrating that Germany is being destroyed for the benefit of cynical economic opportunists: The Syrians – A Refugee Story Raman Peymani December 2 2015

..The “refugee,” freely admitted that he, and all the others claiming to be refugees, were not fleeing war, but had merely come in search of jobs and money.

“…I did not flee. None of us had to flee,” the Syrian freely admitted. The Assad regime is cruel and unjust, but you can live in Syria, if you just don’t mess with it.”

Peymani then asked if the Syrian had then fled from the Islamic State terrorists. The Syrian’s answer in this regard was revealing as well:

“I come from Damascus, like most of us [refugees] do that I’ve met in the camp. There is no IS [in Damascus]; it is in other regions, for example, towards Iraq…My friends and I went because we didn’t want to go to the army. And because it is easier to get a good job and earn money in Europe.”

Peymani then wanted to know why so many Syrians had come so suddenly. “Why now are so many coming? Is it because the Assad regime has become worse?” The Syrian replied: “No. He [Assad] has been in power many years already. The regime is cruel and can kill opponents, but my family and I have not been touched, and none of my friends either.”

So why had they all now come to Europe, Peymani asked, to which the Syrian replied: “In the summer we saw on the Internet that Germany wanted people to live there. We were invited to come here. And it was said that the state would take care of us and we would be given jobs.…My friends and I are here because we thought we’d find work..’”

He was then asked if his “story is typical of the people who leave Syria?” The Syrian replied: “I think most go for the same reason as I did. All men of my age, who want to just live better elsewhere.” (VDARE.com emphasis)

The reason for the indirect speech is the quotations are drawn from “None of Us Had to Flee:” Syrian Invader The New Observer December 11 2015 which is a translation from Der Syrer - eine Fluchtlingsgeschichte published in the German-language version of the Huffington Post. The New Observer has emerged at the go-to source for the facts on the “Syrian” (i.e. Muslim) immivasion of Europe

The American Huffington Post, with characteristic lack of integrity, apparently decided the story was unfit for eyes of English-speaking readers and did not need further investigation. Instead it has been banging the Invite the world/Invade the world war drums with pollaganda like Care about Syrian Refugees? Listen To Them 12/07/2015.

European leaders need to realize that unless they do more to constrain the violence of the Assad regime and make more effort to stop the war, the waves of refugees will not stop. The UN has predicted another million will be displaced in Syria before Christmas, and that was before Russia joined in the fighting.

To solve the refugee crisis, we have to stop the Syria crisis.

A decision has been made to utilize Syrian/Middle Eastern troubles to permanently transform the demographics of as many Christian polities as can be induced to accept these hordes. I discussed the inducement mechanism in Merkel: Gone Mad—Or Bribed? GOP Example Suggests the Latter.